NB ‘TA’ stands for Trip Advisor. You will see my review here when it arrives.

We arrived today, Valentine’s Day, at the Old Station Inn, Hallatrow, at lunchtime, 1pm to be precise,  to find an empty restaurant. There was a lady behind the bar – she sounded Irish – and when I said I made a booking she looked at me as if I was like something from outer space. Eventually she roused her mind to give me an answer and asked me if I wanted to sit inside the main pub or whether I wanted to sit in the adjoining railway carriage.

We were sat at a table and given the menu. She asked us whether we wanted drinks whilst we were taking off our coats and even before we sat down. She bought the drinks and gave us the menu. Some considerable time later she turned up and asked if we were ready to order.

My partner asked for a salmon and I asked for a duck. The food was good 7/10 and there was enough of it. Sometime later after a long pause she came to collect the dishes.

Normally you bring the menu and ask people if they want a sweet course but nothing happened for about 20 min. We then had to get up and get our own menus. We were at the point of going to find her when she turned up, took the order for sweets which turned up about 5 min later.

While my partner went to the toilet I paced around the railway carriage where you get all the old railway photos and she turned up and asked us if we wanted coffee. I said no thank you and she replied ‘when you have finished come to the bar and pay’ almost in the tone as if we were going to walk out without paying. 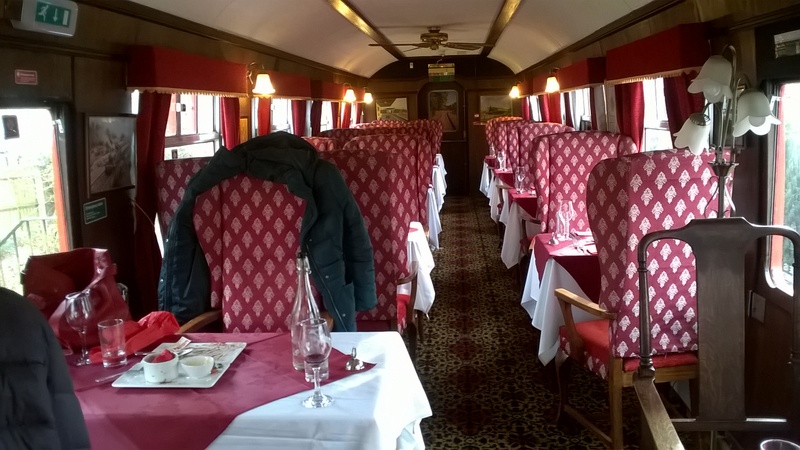 Bearing in mind it was Valentine’s day and we were trying to be as jolly and positive as possible this really put a damper on things.

My impression is that this person had not been trained as a waiter. When I commented on the food she said ‘I will tell my husband’ so I assume she is the wife of the chef.  Clearly, she does not enjoy her job and frankly does not like people. We shall not be returning there for a meal because there’s plenty of other restaurateurs who do offer cheerful service.

My recommendation to the establishment is that they should find someone who loves serving. It may be that I caught them on an off day when the regular waitress was not there but looking at some of the other opinions I don’t think this is the case.

To be fair to her, there was no one else behind the bar and about half a dozen people in the pub. She could have said this.

To TA readers:  I’m very sorry to have to write this. It is my first review for a year or so adding to the 2,000 plus reviews from 17 countries.

PS the cost of the meal for two was £55.30.  It included two large glasses of good quality wine, two mains, two sweets and I reckon the price was about right.  With champagne, coffees, bits and pieces, you could easily spend 100 pounds for two.  However this is an academic statement on my part because I do not intend to go back – if I do it will be to buy a drink for tourist friends so they can see the the amazing retro decor.
*****
It is a windy day today no doubt preparing for the tempest of tomorrow and Sunday.  American readers, I know that this is nothing compared with what you have to put up with – hundred miles an hour wind and so on but we are not used to it so we tend not to bolt things down. Today we passed by the allotments and found that three sheds and structures had been blown down so I must ring the tenants up to tell them.
*****
For six months also I have been waiting on a delinquent lander for company which I invest money with, Folk2Folk, and after six months prevarication they finally got the money from their borrower.  Because I get a higher rates of return on my investment, about 6 1/2%, it is not covered by the bank guarantee people are used to so there is an element of risk.  The person who borrows money does have to give security in the form of buildings so ultimately we would get our money back but it was a bit of a strain. Some of the lenders were quite content to let the company get on with recouping the money but I was not in that category. I remember I wrote a number of enquiry letters.  I make sure though, that they were full of good humour and never a rude word or an insult.  I think the members of staff have got used to me now and we have a mutually respectful relationship – so important this – such relationships are like an elastic band , once it breaks it cannot be repaired.
Anyway the pill has been sweetened by the fact that I got an extra three months interest which as they would say in the East End of London is “a few bob”.  The East End is not what it used to be, it is largely invaded by people from India and Africa and does add a new dimension to the area.  I intend to visit London soon and I shall be wandering up and down the main roads and enjoying the markets with all their colour and flavour.