In spite of of Samuel Pepys’ many duties he used to occasionally lie in bed until late in the morning.  I suspect he needed to because the pain from his various ailments were stronger than he cared to admit. However, this has nothing to do with the fact that today I stayed in the lovely warmth of my bed until 11 o’clock. I disregarded my portable radio news programs which are permanently dedicated to talking about the coronavirus. BORING.

My earlier attempts to get a new car failed due to personality clashes and now I have discovered another example in Somerset which has done only 91,000 miles over a 21 year period, also a Volvo V70 by the way, and I will now be in the process of negotiating a price.

I have always said that a good conversation is far better than either a gin and tonic or an antidepressant pill.  A good conversation gets the brain going, tones up the system, and makes you think that life is worth living – at least it can be on a good day.

My first conversation was an unexpected call from a friend,  a very talented lady therapist and diet expert trying to export her magic medicines to America.  The Food and Drug Administration, FDA,  have a stranglehold on anything and everything that might conflict with the profits of the Big Pharma.  They objected to her inclusion of the word “therapy” on her labeling and also studied her website and found certain unacceptable claims.  Fortunately, my friend knew someone who had worked for an American company who specialised in getting round the rules and regulations of the FDA.

The regulations go to greater extremes than I have ever heard.  Believe it or not, you are not allowed to advertise the benefits of drinking water or infer that it is a good idea for the reason given that people ‘might choke’.  This goes beyond the crazy to the downright immoral.

My second conversation was with chap called Richard who was volunteering to serve drinks at a private view evening of a local art gallery, Andelli Art.  We got on like a house on fire and agreed on so many things.  He and his wife are both enthusiastic readers and we discussed the state of the world, the declining standards and so on.  While I was standing next to him serving drinks, people assumed that I was part of the team and asked me if they could have this or that type of wine.  Throughout my entire life or should I say from the age of about 18, I have noticed that people think I’m an official person and defer to me.

This is particularly true if I wear a waterproof blue jacket.  Don’t ask me why.  I should add on this occasion I was not wearing one.  I decided to offer my services to the gallery and to Richard to make a double act and give a further bounce to the already existing excellent ambiance.  I wrote a letter this evening to the owner of the gallery to propose this.  I’m sure she will say yes. 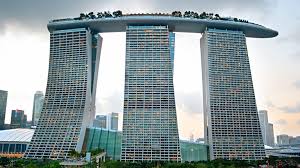 I have discovered through random surfing on You tube a most excellent site and channel called The Luxury Travel Expert.  The site owner has made a number of excellent videos on the most luxurious places to stay on the planet and we spent a couple of hours this evening wallowing in watching long and self-indulgent videos about hotels in for example Singapore and the Maldives. The Singapore example is the Marina Bay Sands Hotel which as a huge infinity pool on the roof.  Rooms go from 222 pounds a night without breakfast which I think is very good for such facilities.

There are over 2,500 rooms and suites in this hotel; I would love to have a couple of nights there just to experience a bit of luxury. Having said that, I have a look at TripAdvisor and it seems that the service has been better in the past but then you cannot please everybody.  The pool is on everybody’s tick box list.  The breakfasts, from looking at the images, are gargantuan and would probably keep you going for the whole day.

Thank goodness, after all this torture of the last few days, my stomach is restoring itself to something approaching normality and I no longer suffer horrible acid or bloating pains.  Fingers crossed.

I don’t know how Samuel Pepys managed with lack of painkillers and medications.  I will take a guess, alcohol.