After last evening’s bombshell by the Prime Minister we are informed that we must stay at home and only go out for exceptional reasons.  It is a question how the British public will respond to this.  First of all, we don’t have nearly enough police to enforce everything.  Tomorrow, I’m going to pick up a replacement Volvo car (2001 vintage)  from Trowbridge, which is 15 miles away from where I live, and since there is no risk of contaminating anyone else I don’t think there will be a problem.

Michael Gove. a UK MP, said that it was all right to go to allotments since the work there would be regarded as exercise.  I’m very much looking forward to this so-called lockdown because no one will expect anything of me.  I don’t have any immediate financial worries (touch wood) so I can enjoy the sun, have loads of time for reading, tidy up the house, and spend time on the telephone with those who might need help all those who just want a laugh.

I’m updating my coronavirus website and giving examples of how the current situation has been planned for years by the various governments including the Rothschilds, the Bill and Melinda Gates foundation, the usual suspects.

A friend has done me the great favour of introducing me to a charismatic personality, alas no longer with us, who is qualified in so many directions but where’s he’s knowledge likely.  I’m in the process of watching a video from him which you can find on you Tube. He is called Murray Rothbard the Texan delight in being perverse and his much loved by his audiences as you will see if you listen to any tape.  I’ve included a link just in case you want to have a look. This man really knows how to communicate because a) he is comfortable with himself b) he does not have a point to prove c) he loves his audience.

Françoise went shopping for the next door neighbour and left the package on the doorstep, the old lady concerned reached for gloves before picking up the vegetables.  I have just put an advertisement in the local paper for gardening.  It remains to be seen whether anyone will respond. I have a feeling with this burst of good weather nature will spring forth and people’s need for having the garden done will be greater than worries about the coronavirus in spite of the incessant fear mongering of the government about something that will die down itself if given half a chance.

I receive on a regular basis a publication called “The Week”.  There is a column that always appears called “it must be true – I read it in the tabloids”  there is a lovely story which I reproduce.

A woman in Vancouver thought she was doing her bit to halt the spread of the virus by carefully washing her hands with a lump of unscented soap she kept by the sink.  After a couple of days, however, she wondered, “why isn’t this foaming?”.  The answer, she finally tweaked, was that the lump was “literally a block of cheese”.  “I came to realise” she told readers on Reddit, “it was a dried – out square of Sharp’s Cheddar cheese.  I suspect I left it out when I was intoxicated and just forgot.”.

A strange thing happened today with the goldfish.  We went out into the garden to find a fish gasping for air about 60 cm away from the pool. There was a lot of blood on the ground adjacent. We rescued it just in time and threw it back. We do not know if it will survive.  This is a mystery.  It does not have the strength to go for a walk on the grass and why should it.  The pond is protected by netting so how could a predatory bird have pecked through the netting, taken the fish, and then decided he didn’t want to eat it and just left it.  Perhaps the fish was too large to be swallowed.  Since we have no remote video system we will never know.

I visited Tesco’s to get the balance of cash for buying my car, petrol and a wander round to see what and what is not available.  There were few people in the store and with the exception of the toilet paper and white flour everything appeared to be in order.  For some reason, the meat and fish counters have been closed.  I bought a few items and approached the till not noticing the yellow tape on the floor behind which I had to stand.  When I went to buy petrol there were road block structures in front of the mini-store where you pay on the idea is that you could not coming unless invited.  When I have bought my petrol I saw someone with a spray wiping down parts that I might have touched.

We watched a very good series on BBC four about Robert Capa, one of the greatest Second World War photographers who was entirely fearless.  He rushed his negatives back to the picture post offices in London but a darkroom assistant ruined most of them, about 100/111.  This is one of the most famous pictures at the moment of death we pay the price. 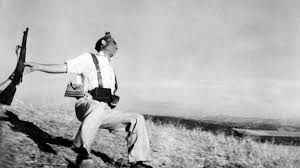 Folk are suffering all over the world from the effects of a wobbly planet.  If you want to come back from Sydney Australia the cost is not less than £1100