It is quite interesting that we speak about a traumatic event when in fact this adjective is a misuse of the language. It could be traumatic to some, shocking to someone else or a source of delight and personal development to a third person. So, it is not a traumatic event, it’s an event. Far more damaging than single events are tendencies over a period of time where your trust in people is consistently eroded until nothing is left. It is difficult to maintain a sense of self worth. Later on in your life for someone to come along and try and build something when in fact there is nothing on which to build it, if difficult if not impossible. That is why so many people going to the world of silent mind.

We both went this evening to hear a lecture on psychosis and obsessive compulsion disease. For the first time in many years. I misread the starting time and we turned up over an hour late and so could not get in. There are always positives to draw and one of them is to make sure that we check and check again on starting times, and details. With foreign trips I’m very good at this but on this occasion my attention slipped and I got caught out. 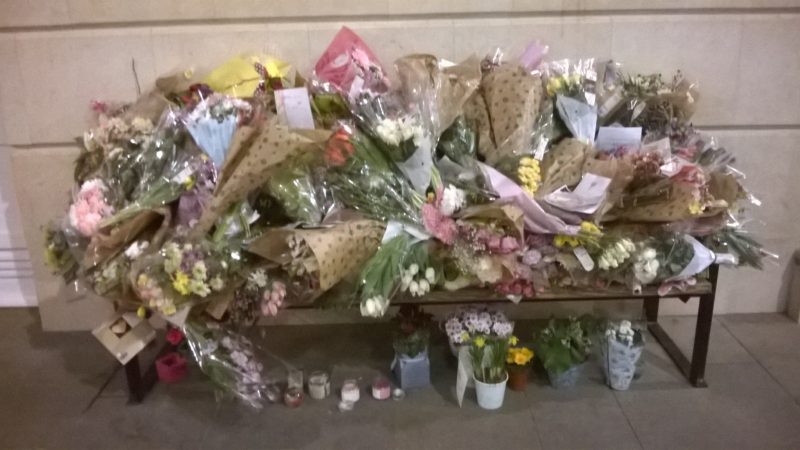 We came across this pile of flowers and letters of condolence for what was obviously a very popular young lady who had died in tragic circumstances. The array was outside a supermarket right slap bang in the centre of Bath, the last place you would expect to see such a sight. I lingered and had a word of prayer with the departed soul but got a lot of noise from her aura. I think she must have died a violent death. It takes ages for some people settle from this type of insult. it is my belief that life simply goes on when you so-called die and that death is very much like taking off your clothes and putting new ones on.

17.3.17 PS I went back a day or two later and discovered a relative of the young lady who turns out to have been 15 years of age. She died because she was allergic to milk would you believe. For a poor young thing to be struck down by milk?  The number of flowers has increased and there must be 70 to 80 bunches. I joked to a passerby that when I pass I wonder how many bunches of flowers there would be at my funeral. He joked that he would have to buy his own flowers. Good old British humour