I had the good fortune and the honour of meeting a retired professor of world politics from America who had settled near Bath whom I met at a temporary exhibition of remarkable photographs in the Victoria Hall Gallery, Bath. He was a duty volunteer at the time. I struck up a conversation as I am wont to do and said that although it was my fifth visit, the photographs spoke to me in a different way each time. They are on the theme of war and conflict and too much to digest at one go. I described it as seeing 12 movie films one after the other. I commented that a good photographer always asks a question and invites you into the scene. We got talking about politics and so on and as you would expect he was very alert on comparing UK politics with American politics. I introduced the idea of the Enneagram, which is a Sufi method for determining personality types and said that America was type 3, the aggressive and commandeering type and UK was type 9 with 1, conciliation and adaption almost beyond what is good for the individual country.

It is so nice to meet someone with a greater view because most people see the world based on their own needs with every other aspect either helping or hindering the advancement of their own needs spectrum. I know the Greeks were very good with philosophy which basically means looking at the whole and seeing what are the main trends. I discussed with Arthur if I recall his name correctly how long would it take before America implodes as a result of its own greed. We discussed Trump versus Hillary Clinton and agreed to differ. The electoral system in the USA is unique in that someone can get in with less of a majority than someone who comes second in the other party so Trump was not elected by the majority; neither was Bush. Arthur thought that Trump’s plan of cutting welfare and Obama care  combined with a tax break for the rich will create further chaos and deficit. He was slightly confused and disappointed with the shenanigans that goes on in the UK.

About yesterday’s meeting I recall that I felt a sense of anti-climax when I left and then I realised that I was simply doing inner work to continue the creative process of the meeting. In other words, I had expressed one end of the spectrum and the other party had spoken from the other end. The requirement is to meet somewhere in the middle. As soon as I realised that this is what had to happen I felt very peaceable about the meeting and was looking forward to the next one. I did in fact receive a letter from the team organiser saying that they were going to meet next week to discuss what to do with my proposals. I think it’s a fair point that creativity does not happen tidily and a certain amount of chaos, differences, confusion, misunderstanding, is all part of the course. In dictatorships, orders are given from the top but in democracies there is more equality or should we say potential for equality.

And so to the RUH Hospital in Bath. It is time for my monthly macular injection for my left eye. Last month I got away without one because I was stable but this month there was a deterioration and more water in the back of the eye.  The waiting room for injections is always very interesting and enjoyable. You know that you have something in common with everyone there which is what makes us Brits more animated. Evidently two of them had just come back from Spain and were both complaining about the cold. Evidently it had been Spain’s worst winter for years with storms and floods and even snow in some places. I love this way of getting information because you know it is accurate. One person was there for the first time, another person was having their 26th injection. we realise that 10 years ago before this injection was on the NHS we would have had to pay the going rate which is now about £800 a shot. I would certainly be near blind in one eye had this problem not been detected at the start of last year. 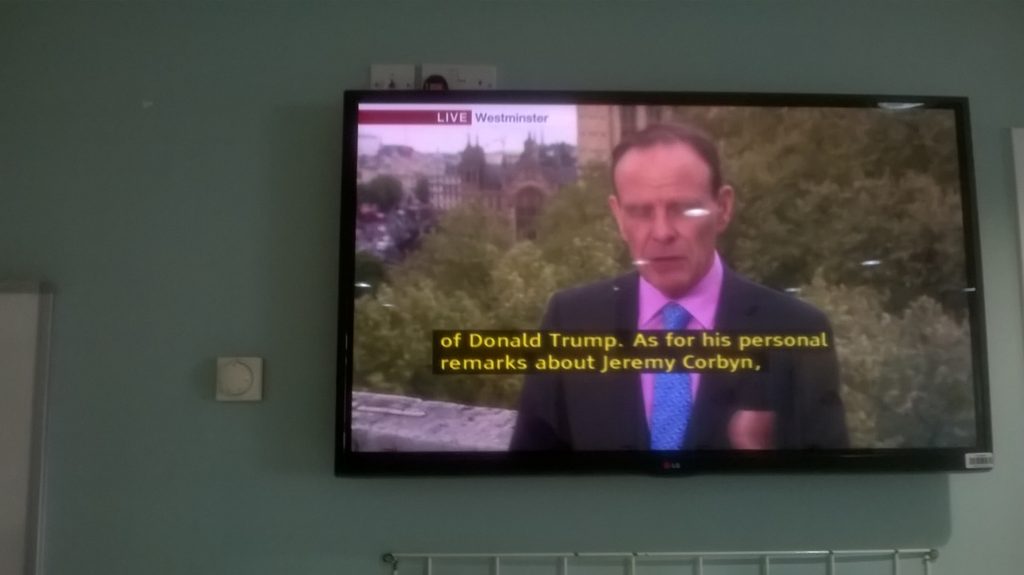 The main waiting-room for the eye department is a pleasant enough place to be in although at times it is very crowded. There is a television there with text describe and the sound turned just high enough that the people can hear what is being said. This was the news bulletin where Corbyn was reported as being called a “Mutton-headed old mugwump“, the phrase that only Boris Johnson, our Foreign Minister, could use. He is very literate and intellectual man with a good command of the English language.  I dictated his biography for a books for the Blind service for which I work. However, I think that name-calling will probably backfire upon him. Jeremy Corbyn replied that he was not interested in responding to such remarks and he would rather get on with the job bearing in mind the elections just a few weeks away. 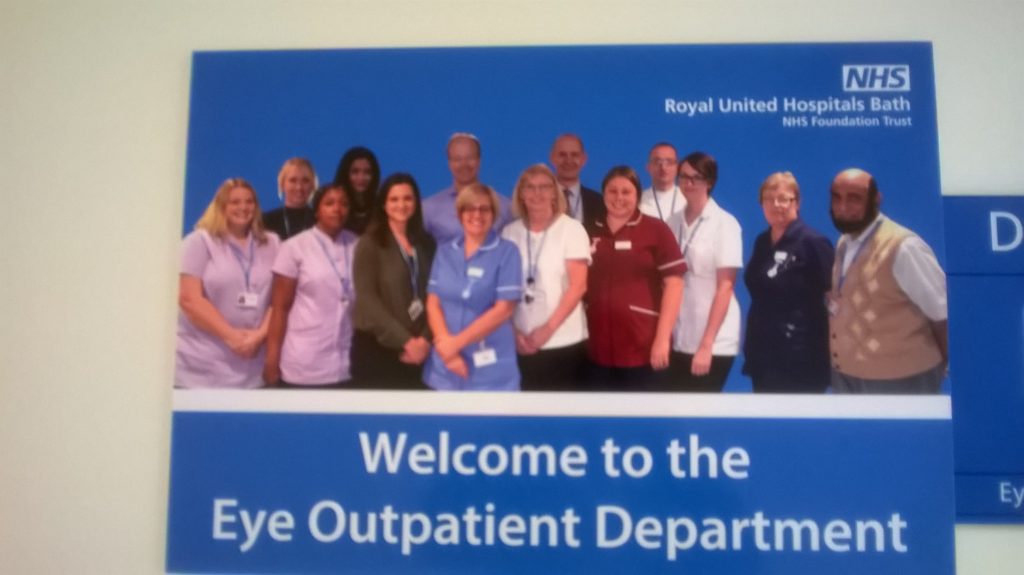 The hospital goes to great lengths to give a personal service as the enclosed photographs indicate. Anything that contributes to the welfare of the patient, and the feeling of community, is not a waste of time.

The hospital does its best to make itself a pleasant place to go to. There is a large sculpture in the main hall composed of items washed up from the sea and it is beautiful though I don’t know how many people raise their heads enough to look. Along the corridors are hundreds of photographs and paintings and it does transform what is a long and boring corridor into an art exhibition. Well done people. 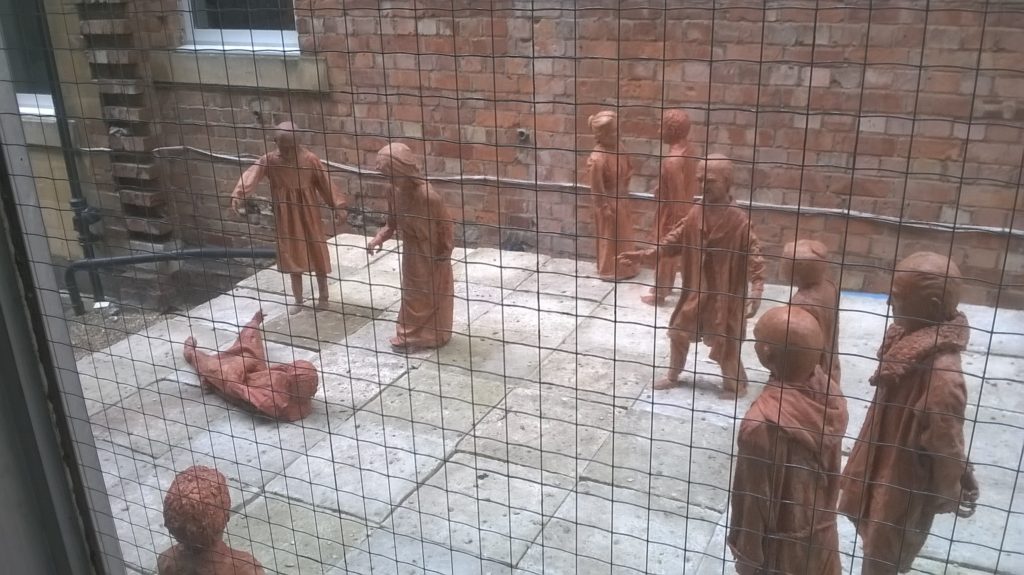 I was very much drawn to a sculpture piece which I have attempted to photograph. It is on the way to the main restaurant on the ground floor. It was called ‘The Casting Out’ and expressed in one installation people’s various attitudes to someone stricken with leprosy. It relates to the Bath Leper Hospital, one of the first leper houses in England formed in 1100 A.D. and continued to function for hundreds of years.

People thought to have leprosy were outcasts from their communities and underwent a symbolic funeral on admission. They had to give up all their possessions and relationships and we declared dead to the world and born-again to God.  Communities have to decide how to cope with anyone who seems to be a threat: in this case from infection, but also from violence, loss of livelihood, religious and cultural differences etc.

The model displayed in the work above is a third of life-size. It is made of cement fondue, the material that a notional life – sized sculpture could be made of.

The artist is Martin Elphick.

2 thoughts on “viewing the smaller from the greater”