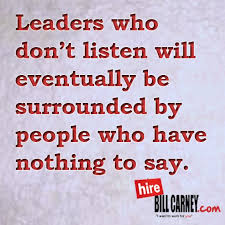 For seven years I was a boss of an organisation, albeit a small one and I have since then had dealings with a large number of people who were bosses of small or large organisations. I’m not particularly proud of my performance. I was in my 20s, excited about an idea but clueless as to how to deal with people. I had a wonderful secretary called Carol from Blackburn who put up with me and whose exquisite tact saved me from a fate worse than death on more than one occasion.

I have to say to my great regret that the traditional style of management has been subject to brutalising forces or to put it another way has become Americanised. The excuse given is “efficiency”. Never mind that the owners and directors get many times the compensation of the poor workers who often struggle on minimum wage.  People are treated as things, as robots. Productivity targets are issued and people had to adhere to them come what may. We know all this, but I want to tell you about one or two examples of managers or bosses that has stuck in my mind over the years. First, a quote

“People don’t leave bad jobs, They leave bad bosses. A boss creates fear and makes work drudgery. Most of the time an employee has an issue with a company, it is something relating to their boss.You spend half of your life at work, and your immediate supervisor determines the atmosphere. Life is too short to spend 40+ hours a week in constant stress and misery.”

A number of years ago I dealt with a boss of a printing company in Newcastle, Doig brothers I think it was. He was immaculately dressed and extremely courteous. I asked him when a particular delivery could take place. I gave him a time and his first thought was that ‘the men have their morning coffee break between 11am and 11.15am and they would be able to come after that time’. I was a young and impressionable man at that time but was so impressed that he respected the needs of his staff so much that he was prepared to work around them.

The other genre of action that I recall was when I sent a job for printing. Instead of doing it by rote, the manager rang me up and asked me if I had seen a typo on the front page. Would I like him to correct it? I thanked him profusely while cursing myself inwardly for not being alert enough.

Dealing with people on the phone and in general, it is very sad that as I think forward and compare the attitudes of 30 years ago with the attitudes today, I can think of few extra examples of going the extra mile. People are so worn down, anxious for their jobs, fearful for loss of productivity knowing that every keystroke and conversation is recorded, almost made robotic by scripts and stock phrases such as “is there anything else I can do for you” or the dreaded “have a nice day”.

Good managers are in my view born not made. The instinct to care for people under one’s wings and to give everybody a chance to speak out is what I would almost call a gift of the spirit. As a manager, you need to put your ego aside and remember that anyone is capable of being inspired with an idea that could help the whole company. It may be countervalent to an idea that you the boss holds dear but isn’t it worth a listen? Are ideas such a threat? Is the ground on which we stand made of rock or  sand?

The quality that I admire most about people, managers and bosses included, is pragmatic humanity. I have just made up this phrase. I could also say ‘compassion with realism’. What is the way of getting people to work productively? You can bully them or you can inspire them. I know deep down which is the right one. A problem in a big company is that the bosses may be decent people but they themselves are driven by those above who are only interested in profit to behave in a certain way. If you read about Amazon and Walmart and the manner in which they treat their staff, do the opposite and you’re probably on the right road.

It is a strange if not surreal experience to be in touch with someone that you last met 20 years ago. Social media,  in this case LinkedIn, has its value.  I saw a familiar name while being invited to connect with strangers as they do but an old friend called Hilda popped up. I met her in my early days of living and working in South Africa. I can understand a little bit better people who have been released from solitary confinement for a number of years meeting their friends and relatives for the first time. Where do you start?

There are some people with whom the soul connection is so strong that it is almost as if you were carrying on a conversation that you stopped yesterday in other words time does not matter. In other cases, and where life changes have had their impact, it does take a little bit of work to get up-to-date but it is always worth it otherwise they would not be the impetus to reconnect in the first place. There is something about an old friend that can weather the storms and turbulences of the years and still find there is something to talk about. I do wonder about our capacity, ability or desire to make new friends when we are in our 60s and 70s but of course we want to be friendly with as many people as possible. My impression is that most people have shut up shop on possible new soulmates. Maybe they have given up I don’t know. All I know is that there is safety in numbers, a little bit of nutrition from many people is probably the safest way to go if you don’t want to be disappointed.

It is the habit of many species of animals to hibernate in the winter. I have long been fascinated by this ability where they do not fully awake, where their heart beat slows down ditto breathing. This winter I intend to emulate them. Last evening I went to bed at 8 PM. Apart from reading the paper I did absolutely nothing but staring at the ceiling. I rose this morning at 8 AM. That makes a whole twelve hours in bed. I have to say that I woke refreshed in a way that I cannot recall having been the case for a long time now. I have a suspicion that I have guilt about so-called ‘doing nothing’. Well, guess what guys, from now on the world is going to have to do without me, from time to time at least. I doubt if anyone would even notice but I certainly will. I want to be around for a long time and I don’t want lassitude or illness to beset me.

Selfish eh? I don’t think so. 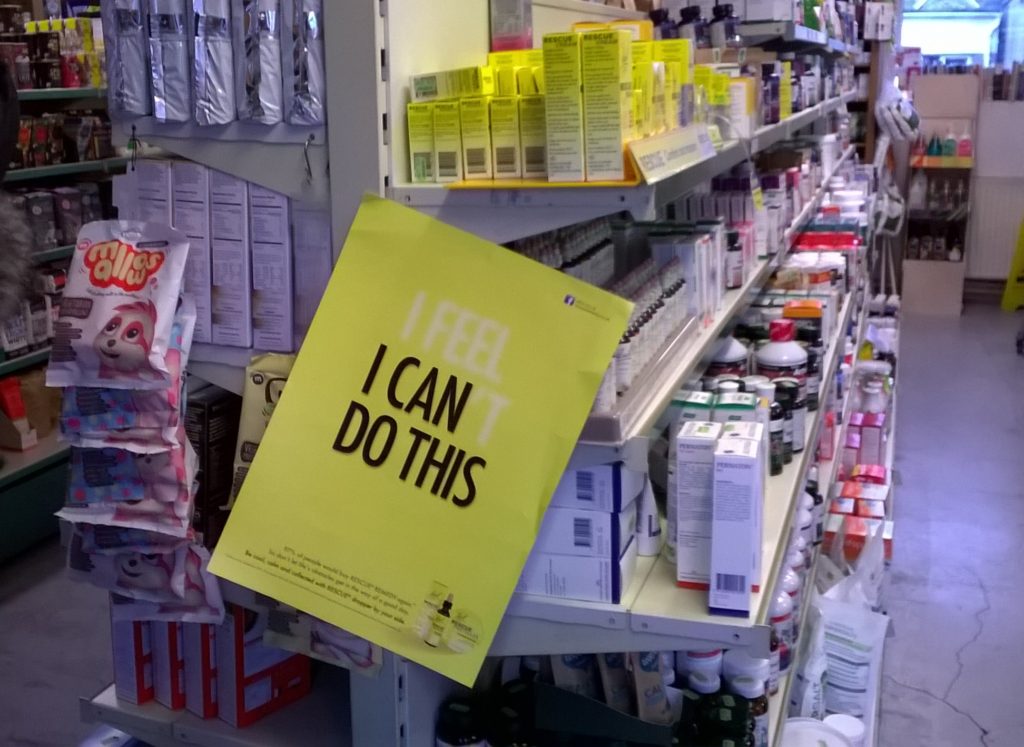 We are blessed with having a local health food shop which for a town of 20,000 people is quite good. It has recently been taken over by two new people, Ian and Emma, and they have been working seven days a week for the last few months to renew the stock and increase the quality thereof. Other Half and myself went to the shop this afternoon to have some self-indulgence, I to have a coffee and cake with two generous scoops of ice cream one vanilla and one strawberry.

I saw a notice at the entrance to shop on the left by the Rescue Remedies and I was very struck by its simplicity. No fancy design was required; the emboldened message itself was enough. on closer examination I see the almost invisible white text which says I feel I can‘t and it has changed through the use of colouring.