I switched on Trans World Radio early on this cold and frosty morning. The rising Sun is making the clouds appear pink. I look forward to a day of arranging the Christmas decorations, planning food and all the tidying up things that you do before Christmas. It is easy to go into overdrive and lay in food as if you were going to be besieged. The fact is that with the exception of Christmas Day and sometimes Boxing Day, shops are open and you will not starve to death if you don’t go overboard at each meal. The main point of Christmas is fellowship and so long as that is available in abundance then ‘job done’ not to mention remembering the reason why Christ mass is here in the first place. 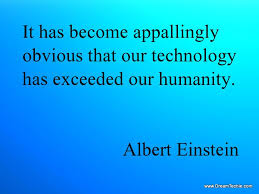 Denis Alexander is the emeritus director of the Faraday Institute for science and religion. He has published many papers and books in science and religion. He gave a quote which stuck in my mind, even at 7.30 in the morning before about my coffee,  ” Technology is a queer thing. It brings you great gifts with one hand, and it stabs you in the back with the other”  Carrie Snow (no idea who she is). I’m attracted to other  quotes ” The real problem is not whether machines think but whether men do” B F Skinner. “everybody gets so much information all day long that they use their common sense” Gertrude Stein and finally – if there ever can be a finally – “Technology is a useful servant but a dangerous master“.

If I tried to sum up the application of science which is called technology I would probably bore you all to death and anyway you can find most of it on the Internet. What concerns me in particular is the ticking timebomb of mobile phones particularly those used by children as young as two and three. There is significant microwave radiation and if the phones had been subjected to proper testing they would never be used. I would like parents to consider the fact that their children’s use of mobile phones even for shorter periods is like putting their head in microwave ovens. I dread to think of the number of cancer cases we are going to get in a few years time when finally the companies will put their hands up in the face of irrevocable evidence that mobile phone use interferes with the brain.

The problem is particularly bad in cases where the signal is weak. It means the phone has to work extra hard and radiate even more to detect the signal. There is so much written on this that I simply refer you to Google.

However the main reason for writing this article is to reflect on my own use of the Internet and in particular the amount of time I sit in front of my computer seeking all sorts of interesting information and writing these diaries which I so much enjoy and have become a daily part of my life. It would only be possible with the use of speech to text Software so thank you Dragon Dictate for enabling me to write up to 1000 words in 20 min. That is of course if you know what you want to say and have an eagle eye for miss-spelling and misunderstanding.

My recent decision is to intersperse sitting at the computer with reading, walking outside, doing something requiring a different skill set and this seems to work very well. Everything radiates but it’s not so bad as the old cathode ray tubes. I think it’s the sitting stance in the absence of rarely suitable chair that may eventually take its toll of the human body.

On a more dystopian note, we get our perceptions of the world from what we see. If we are fed false information by those who want to control our perceptions, they have us under control. I’m so grateful to have taken the red pill not the blue pill and sad to say act on the assumption that everything we hear in the media is controlled, is a lie, or cover up for a lie. The controlling elite have to retain their power at all costs even if it means killing people.

I read quite chilling article about the number of alternative medicine doctors researching in cancer who have mysteriously died, approximately 80 to date. This happens so frequently not only in this field but for example anyone who has a court case against Hillary Clinton, that the term used by the targeted media is “suicided”.

Studies have been done from the presence of Nagalase (aka N-acetyl-Galactosaminidase) is an enzyme that’s involved in sugar metabolism. Cancer cells and viruses excrete Nagalase into their hosts. Nagalase prevents the formation of GcMAF. Elevated levels of Nagalase are present in patients with cancer, autism, diabetes, immune disorders and in those with viral and bacterial infections. The cases of suicide involve  doctors who were studying GcMAF (Globulin component Macrophage Activating Factor) to treat patients with cancer and autism are seen to be the most significant.High levels of the new biomarker Nagalese have been linked with the massively increased schedule of vaccines in recent decades and which have coincided with the sharp rise in cases of autism.

As for the ability of GcMAF to neutralize Nagalase, researcher Melissa Dykes wrote, “Cancer is big business in this country. We’re talking about a 124 billion dollar industry. A number that big is naturally a matter of ‘national security’. One of our country’s biggest products is cancer, so why anyone believes the system would ever allow a cure is beyond me.”

If you want to watch a video on this then check out here.  How long the video lasts on you Tube without being taken down is a question due to its extremely sensitive and explosive nature. NB the person who made this video is not a doctor or a qualified person about someone who is outraged and disgusted by the deliberacy of the harm being done to innocent people. The people who do this are psychopaths.

One of the young chaps on our allotment joined us this time last year as a stuttering youth incapable of addressing people with any degree of confidence. He was bullied at school and was not doing well. We gave him a plot which had to be signed for by his parents because at the time he was under age. I cannot tell you the change in him because he now has his own private territory – the plot –  where he can grow things and provide for his family. when I met him six months earlier, he was afraid to approach me  but now calls me Brian and says ‘hello how are you’ and spends lots of time on the plot, sometimes with his mates. What a healer is nature, but also how important it is to encourage a young person to counteract the bullying and mocking of cruel peers. I think environment plays a much bigger part in healing than we might imagine. 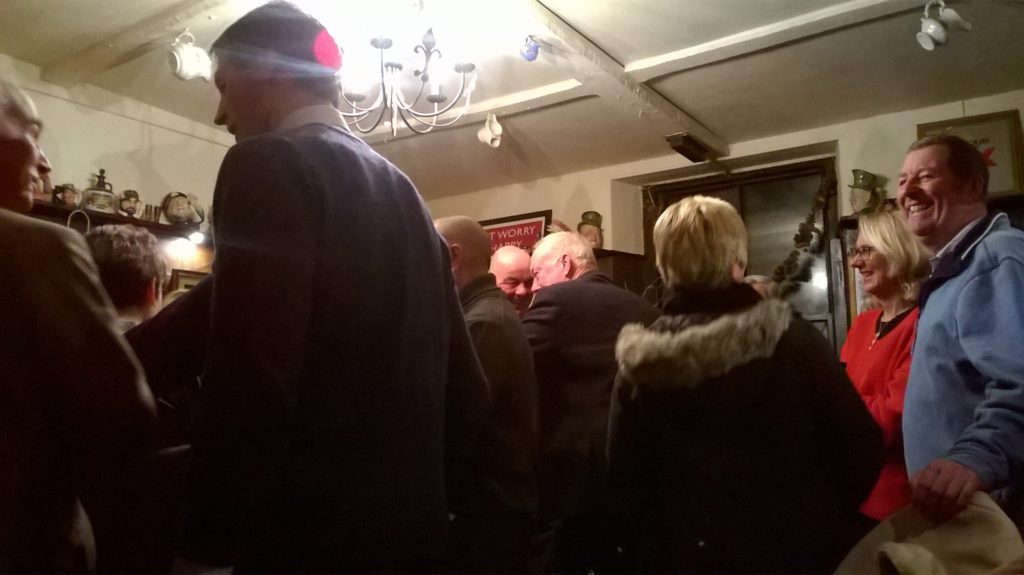 To our favourite local, the Old Down Inn. We could hardly get in to the admittedly small bar because there were so many people who had booked tables for supper. They were all farmer types and boisterous to boot. We sat at a table and kept out of their way.