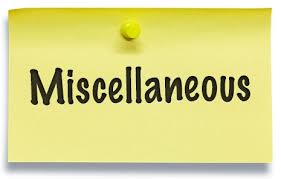 I love the sound, feel, taste, appearance, of words. What a lovely word ‘miscellaneous’ is. It has Latin roots written all over it. It is from the verb ‘miscere‘ which means to mix and indeed as usual my day has been such a mixture.

The conditioning for us to accept the wearing of embedded micro-chips has started in earnest. The naive or perhaps complicit BBC have told us a story about 3000 people in Sweden who have been chipped. The justification is that they can carry about a record of whether they have paid their train fare or not. The Nordic countries are very efficient and a little bit machine like in their thinking so they would be the first ones to try the system on. The chips can be easily used to draw money from your account, to establish creditworthiness, to use on public transport, to act as a general form of identity, to keep your medical records, so what could be better.

The problem will come one day when you try to draw cash from a machine and this is denied because some nameless entity says that you have not paid a bill and you have an order against you.  I have discussed this before but it does bear one or two more outings. Once they have you chipped, they have your soul end of story. It is designed to grow into the flesh you can’t just pick it out with a Stanley knife.

Last night, we watched a very long film about the history of Mont Saint-Michel in France. It has been active since the eighth century A.D. and has been on the street, a prison, a refuge, a centre for pilgrims, and been rebuilt several times after wars or fires. What a relief it is to see a one and a half hour documentary full of fact, people not posing to the camera, carefully crafted, not an insult to the intelligence. I contrast this to the overhyped fayre of New Year’s Eve when the cheerleaders says in a hysterical voice ” is everyone having a good time?”. When the Performing Animals don’t respond loudly enough the cheerleaders says “I can’t hear you, sheep, are you having a good time?”.

Incessant rain today so no gardening. It would not have been a very good way of starting the year as a whole countryside is damp and cold. Fortunately, the client is understanding and doesn’t need the job done in the next 5 minutes. As a gardener or contractor, it is very necessary to maintain control at all times. People have let the situation run for 12 months and suddenly decide they want it next week. The worst thing you can do with any job is to rush because it puts excessive pressure on you, you tend not to enjoy it, and wish you hadn’t started in the first place.

I was watching yet another film on the theory that the USA moon landing was a fake. Most of the footage was filmed on the studio for the blockbusting film 2001, written by Arthur C Clarke. In this particular example, the researcher was looking back at early clips taken from the various moon landings and noticed that sound could be quite clearly heard when for example someone was banging in a spike to the moon’s surface. Because there is no air on the moon it is not possible to hear air-born sound but there it was on the tape clear as day, tap tap tap. We were also shown strange unexplained tags on the top of the astronauts’ oxygen containers which the researcher maintains was used to attach fine wire to pull people up in the air and give the illusion of being weightless.

I am making my goal the finishing of David Icke’s latest volume called “Everything you need to know but have never been told”. I almost hesitate to mention the detail but it is interesting that when a large object that we take for granted such  as the moon is struck with a heavy object it rings like a bell for up to 30 min. We would not get this effect if it was a solid object so what is it? Has it always been there? One of the books, Who built the Moon, might introduce the subject to you to at least be aware that there are people who question what they see.