Finally, the government has formally acknowledged that loneliness is a problem which costs us dearly not only from the impoverishment of society viewpooint but also on consequential costs of depression in terms of hospital beds and so-called painkillers or antidepressants which let’s face it only makes us psychotic. <small rant> The list of side effects is a mile long. Let’s not go there. On the other hand, research has shown that hugging  is very effective at healing or shall we say lessening the effects of sickness, disease, loneliness, depression, anxiety and stress, I’m not talking about notional robotic hugs but real heart-to-heart hugs. How can you be hugged by a pill? It is a very poor substitute.

Tracey Crouch, MP for Chatham and Aylesford, has been appointed Minister for Loneliness. I suspect that part of the driving force for this was the commission on loneliness catalysed by the death by murder of Jo Cox. The report which I will not repeat here, click on the link,  is a very finely gauged estimation of what people will actually read. Reports are normally regarded as boring but no one can say this in this case with Jo’s report. The layout, the fresh air (perhaps a bit too much), the design, as well as the content, is exemplary. It has been put together with great dedication and love. Some of the diagrams are a little bit ambitious but clearly somewhere behind-the-scenes someone is asking us to take the vision of what causes what. 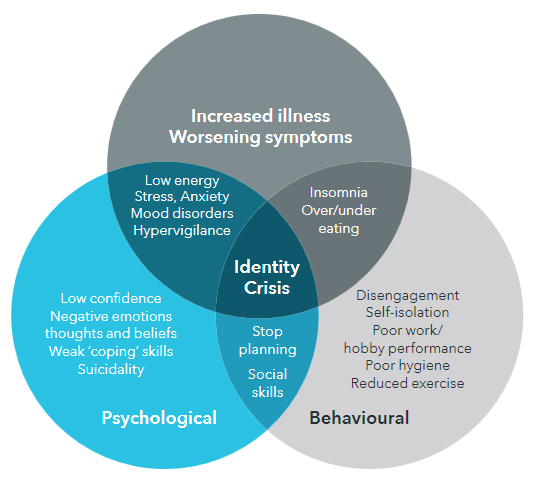 You really have to work at the one shown here. I don’t find it entirely clear and perhaps it is my poor old brain or perhaps an attempt to introduce too many elements into one diagram but the whole report is certainly worth a read.

Way back in the 70s, I started a social organisation London Village ( not the London Village Ltd which met under the arches at Charing Cross) but one that I ran from a small office in Fulham. The idea was that newcomers to London would use the meetings and the opportunities as an easier method for meeting people and feeling at home. In reality, it’s mostly as a re-starting point for those who had got divorced or finished a relationship. This was in the days before the Internet when computer databases had just got started ( anyone remember punch cards?) so if I had tried to start this type of face to face venture now now I wouldn’t have stood a chance.

London Village was a great success. At its peak, it had over 3 1/2 thousand members. Most of the meetings took place in people’s homes where there were parties and discussions and so on. Other meetings took place is in pubs and yet other meetings in public places such as art galleries and going for walks. This was the era before mobile phones when people actually spoke to each other. It is paradoxical that in this time of technological connectedness, there is more loneliness or appears to be than ever before. I think we will find an increase in depression among  teenagers when they discover too late that their brains have been rewired away from the human being and towards small shops of dopamine when something they write on their device is liked.

Nowadays, it has never made me feel entirely comfortable that while eating my Christmas lunch in the company of others,I’m always aware somewhere that there are many people particularly older ones sitting on their own watching television and perhaps eating a heated up meal from the microwave. The point is it’s nobody’s fault. Is normally a combination of circumstances. For example: my spouse predeceases me and I feel lost without him or her, plus I had a bad fall recently so I can’t get around the way I used to plus the fact that my flat is damp and that makes me depressed and gives me a bad chest. The doctors pills do not help.

I can understand why people feel stressed and indeed suicidal. We are told this morning that over 30,000 nurses left the NHS last year and as one of them was suggesting it’s not the work with the patients that is stressing it is the demands of management, being treated like an object, being undervalued, having an endless list of things to do with the result that the initial enthusiasm for making a difference fades out. It is paradoxical one can be surrounded by people in yet feel lonely.

I don’t want to go into a big discussion about what loneliness is, but a part of it is not having someone to talk to you and listen to you and respond to you. We are built to share, we are social animals, and if this channel is cut off we diminish as human beings. That is why solitary confinement is so cruel and dehumanising. It is possible to be lonely when surrounded by people who feel they are not on your wavelength in which case I would use the term ‘alienated’.

We can all make a start with this problem. As it says in the Jo Cox website ‘start a conversation’.  As regular readers of my diary will be aware, I make it a rule, when walking abroad, to speak to anyone with a pulse who gives out the slightest body signal of being an interactive human being. I do it at all times but particularly on occasions where people are under stress such as yesterday when I was in the RUH Bath eye clinic. There was a couple who were obviously a bit under stress. I made a joke, inane you might say, but it brought a smile to their face and I think if everyone did this, the atmosphere of our society would be better. If you walk down a high road where 80% people miserable, the atmosphere will not be very good. If you walk down the same high road with only 20% of people being miserable and so 80% of people being happy then the atmosphere will be very much better.

This does happen quite naturally on certain occasions when enthusiasts are drawn together through an interest in a certain subject. It also happens naturally in country areas by the way (plug for living in the country).  I cite the regular Christian/pagan events at Chalice Well in Glastonbury. Everyone is on the same wavelength and talks to each other without any problem. That is how society should be. We can all play a part, starting here and now, and you will be surprised what a difference it makes to your day. The difference it makes to the day of other people only the Good Lord knows but we can make an inspired guess. Positive?

Oh, if you want another take on this checkout Jim Corbett’s website video. The relevant bits starts at 11 min 12 seconds