Spiritual programs are marginalised by the BBC to antisocial hours such as 6:30 AM on Sunday morning, repeat at 11:30 PM. In these days of catch up I suppose the timing doesn’t matter in the way it used to, but there is something about listening to a program ‘fresh’ when other people are listening to it. Such a program is “Something Understood” which was introduced for many years by Mark Tully, whom I believe later became disillusioned with the BBC for reasons that I can’t possibly imagine. Sir Mark lives in New Delhi. A  Daily Telegraph article said in 2010 “Despite his age and infirmity, he remains one of Britain’s most popular broadcasters – is the Radio Four show “Something Understood” which focuses on matters of faith, has (had?) more than 1 million listeners.

Sunday’s programme, given by writer and priest Malcolm Doney,  was about rumination which is the process that sheep and cows use to digest food; the analogy was drawn with the way we digest ideas. I would like to use this inspiring program as a basis for my thoughts today. The kicker was at the end of the programme with a lovely quote “I saw that there is room in me for a second and huge timeless life”. That caused me to jump out of bed and write it down lest I forgot.

Although inspiration may occur suddenly, it can take many years of preparation rather like an ‘overnight success’ with the public. We do not see the early struggles of artists, entertainers, and writers. Think of JK Rowling.  I regard inspiration as a natural state which correlates with a person being true to themselves, learning to listen, and being in harmony with nature. May I draw your attention to the fact that it is called inspiration not expiration. The origin of the word inspiration is from the Latin inspirare, to breathe in. Much as we would like produce inspiration to order, this is not the way it works.

First I think we need the desire for something, the will, the focus, the intent. We then give notice to our subconscious mind that we are looking for a result and our mind / brain keeps instruction on its files and is always on the alert for information which may be relevant for it. Alas, it is frequently the case that we are so busy rushing around putting out fires that we don’t have time to sit down and meditate or as some would say to be in the alpha state.  It should be noted that the word inspiration is ethically neutral. Hitler was inspired, Genghis Khan was inspired, Archimedes was inspired, Steve jobs was inspired, Gandhi was inspired, the latter case by inter-alia frequent correspondence with Leo Tolstoy.

I do not think an idea can be forced into life. I think it comes when it is ready and when the circumstances are right. I have noticed that inspiration comes mainly when you’re thinking of something else and not fretting and worrying about the normal ups and downs of your life. I have had a look at quite a number of people who have been inspired and they seem characterised by a lively and enquiring mind, and an interest in other people.  I don’t think we should expect something to happen to us but see inspiration like a bird that lands on our shoulder when we are doing something else. 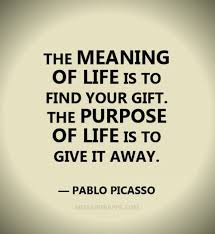 Sometimes an idea can come from combining two ideas. I understand that the tablet devices were inspired by at least two existing ideas: clay tablets used 3000 years ago and the modern laptop. The huge one ton capacity bags that are used to transport stone and sand could have been developed from combining objects like a handbag or plastic bag, and the pallets used for carrying heavy material. I think the more sources of input you have, the more variety of stimuli you experience, the more your desire to change the world, the more likely you are to be visited even inspired.

No doubt I will have further thoughts on the matter which I will share with you but meanwhile Manchester city is playing Bristol so I will be rooting for the emergence of the giant killers (take that however you want).