When visiting London, we always take the same bus to Bath and always visit the same coffee bar which is that of the Methodist Church a stones throw from the station. I saw a feature in the coffee bar that delighted me. May I refer you to one of my previous diary entries about loneliness
To my amazement I saw a version of the idea 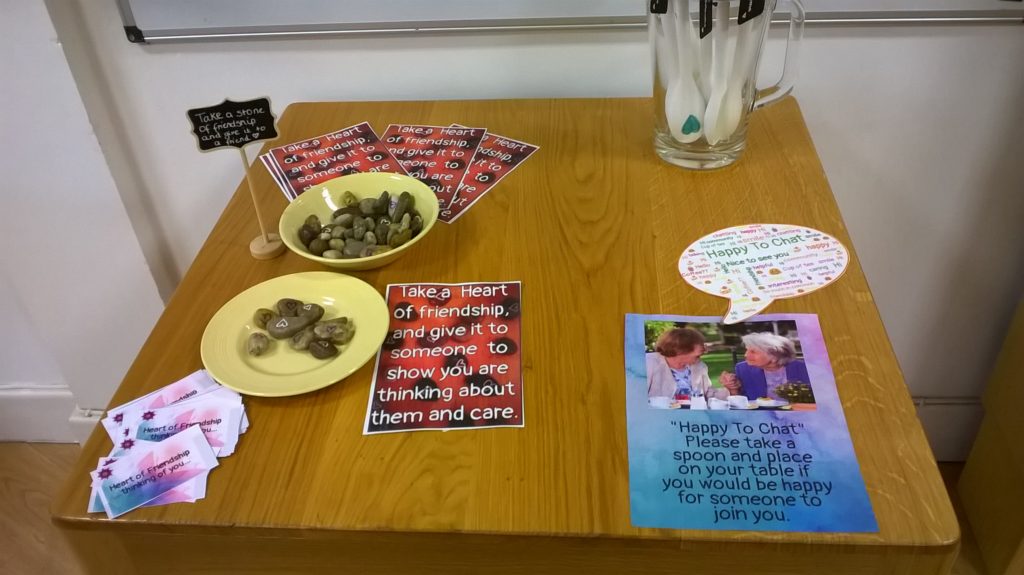 I was given the little stone with a heart on to give to other people and pass on the blessing. There was also a very lovely table placer with lots of encouraging words on. 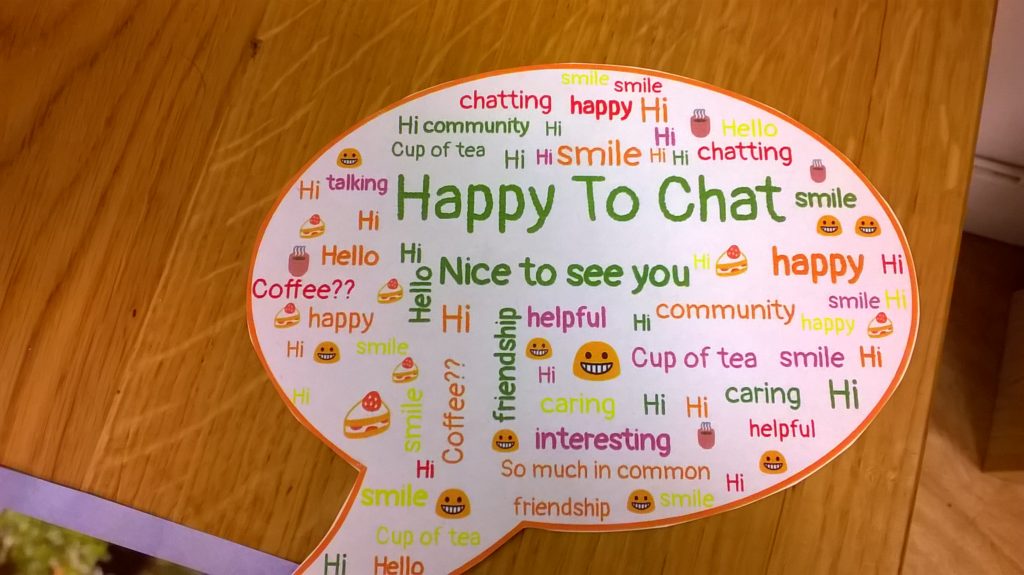 I believe that there are many ideas that people would adopt if only they knew about them. I think they got this one is slightly wrong because you’re supposed to take a spoon and put it on your table to signify that you would be happy for someone to talk to you but this is almost the very place they don’t need it because everyone talks anyway. I would rather see it in a more impersonal place where more encouragement is needed. Anyway, 10 out of 10 for trying.

The particular bus we normally take, the 403 at 11:15 AM from Bath, takes about three hours as opposed to the train which takes one hour 30 minutes. As discussed elsewhere, the train is more expensive. I can get an off-peak return by train for £79.80 if I  book in advance as opposed to the £11 I paid for this trip. Enough said.

On arriving at Victoria Coach Station I took the C1 bus towards South Kensington. For those of you that are unfamiliar with London, South Kensington has the science Museum, the Natural History Museum, and the Victoria and Albert Museum. I was aiming for the latter because there was an exhibition of AA Milne’s “Winnie the Pooh”.

On the way, I noticed that people were queueing up for something that seemed like afternoon tea and I realise this must be a new fashion amongst the darlings of Chelsea. 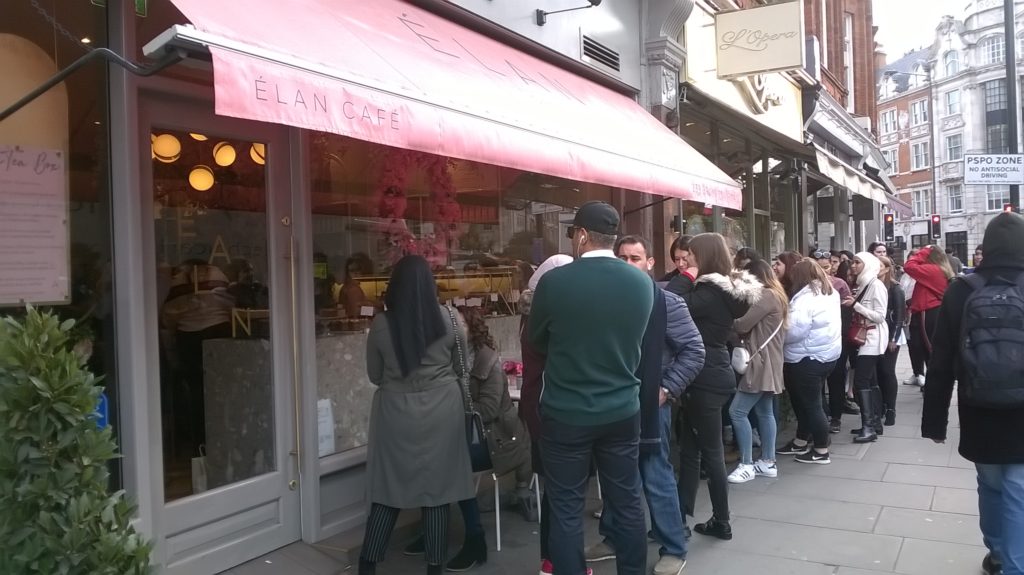 It is very pink and girly and just the sort of thing that Japanese tourists would love. It is strange to see queues at three o’clock in the afternoon.

So here am I swanning into the main entrance of the glorious Victoria and Albert Museum, named after Queen Victoria and Prince Albert. I go up to the desk and see that the beloved exhibition that I was looking forward to seeing is fully booked. It is also fully booked tomorrow Saturday. It is also fully booked on Sunday but there is a chance that if I turn up at 10 AM on the dot I may get one or two tickets if I am lucky. The lady on the desk strongly recommended me to buy in advance on the Internet in future.. It is clear that a visit is not possible and to cap it all the exhibition closes in two weeks time so I am well and truly out of luck. I tried to get some benefit by finding an accompanying book which often accompanies an exhibition but no, no such luck. Not even a postcard

Anyway I decided to wander around and refresh my memory of this museum that I last visited about five years ago I think. I notice that this establishment is always updating itself, new facilities, bigger and better bookshops, all to better serve the very large numbers of visitors they have each year. If I recall,  the numbers are 3.4 million. There was a lot of footfall today and much animated conversation and it is obviously ‘the place to be’ for locals. The tea rooms are extensive an expensive. There are about four types of seating area; you can help yourself to different genres of food anything from coffee to a quite expensive salmon salad. 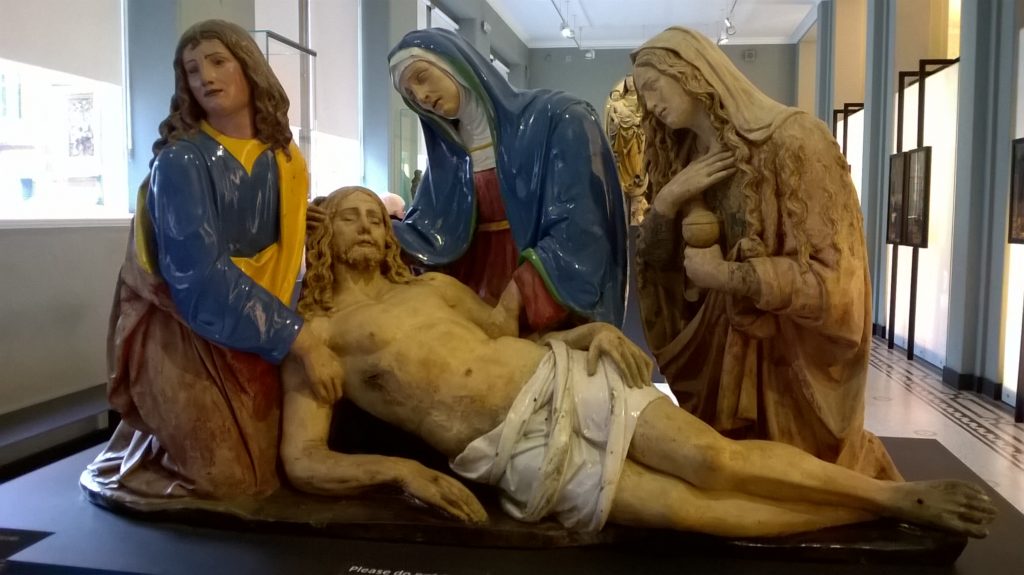 This work is entitled “The lamentation over the dead Christ”, a glazed and painted terracotta work of about 1510 – 1515

anyway, after a time, I got indigestion from the sheer number and glory of the works. By the way, admission to 90% of the gallery is free if you do get plenty of value.

I departed and wandered around the French Quarter of South Kensington where there is a large French lycee. I took a picture of some bears to compensate for not be able to see the actual show. 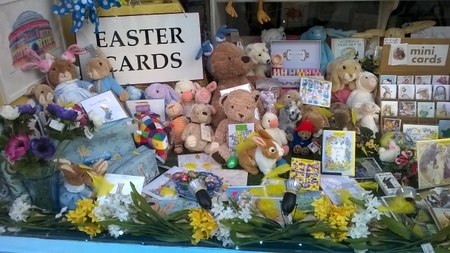 And so to South Croydon where lives my sister.