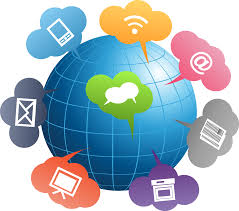 One of the positives of modern technology is that we can have a word with someone without having to physically go and see them. In the time of Samuel Pepys in the 17th century, there were no such things as telephones and people used to meet in coffee houses to exchange gossip. Now, we have more information  and channels of communication than we can possibly handle and it behoves us to be sensible and selective. For all its faults, I find the Skype platform more useful than not. It does not have to be used to discuss trivia.

Here is an example of a conversation I had today

Brian: I rather like the idea that we are all a computer projection and don’t exist in so-called reality. The problem is, where does the soul come into this.
Friend: I think its similar to that analogy. The universe is made of matter which is essentially energy. What we perceive via physical senses is an illusion essentially. However everything is derived from consciousness and is holographic and can access the whole. We are defined by our degree of restriction between the two absolute poles of togetherness and chaos and the universe reflects this
Me: So it’s a continuum then between togetherness and chaos but I suspect the tipping point is not 50% between as far as our future is concerned
Friend: Each individual unit of consciousness is defined by its degree of separateness! Each choice and action we make will overall determine our fate. We are all trapped in the wheel of reincarnation – there is a way out but requires right mind, right action, right choices. Our karma by restricting other people’s freedom entraps us.
Me: It’s a bit like continuous assessment for a degree. That seems very fair to me otherwise St Peter who sits on the Pearly Gates would be very busy. the system runs on auto.
Friend: There is no judgement – we are who we are (There is always potential but this can be lost in the noise) – unfortunately through many many lifetimes we are now living in a world that reflects each and every one of us – we all contribute but now there beings that want to capture us and use for their ends.
Me: A good argument for a Teflon aura without any ambivalence
I guess it’s the damage you cannot see which gets you
Friend: Time to get away to a new Blue Planet but any physical place will still end up the same via entropy. Will start as paradise and devolve . However with some momentum and understanding and actions going to a better place could be stepping zone out of physicality.
Me: “The incredible lightness of being” I find very tangible lightness when I have done good and affected someone else’s energy field by releasing their burden. I think we have to live in this lightness space all the time and then we fill ourselves with hydrogen as in hydrogen balloon and then we will naturally float up when the time comes for transition. it’s the continuous effort or continuous understanding or continuous focus
Friend: Yes – I think experience tells us that helping anyone gives good feedback and pulls us towards unity but its dynamic – I don’t think many in the western world now really understand the predicament we are really in. My student’s wife is having their third child but he is now 2 weeks late – I said he clearly doesn’t want to be born and who can blame him – upset a few people! He will be born I’m sure just awaiting for the right position of the planets

I think the solution to loneliness or more commonly alienation is to maintain continuous threads of communication with people even though you don’t speak with them all the time. It is a matter of discipline, and not slipping into self-pity. We are all hot wired to be in relationships with other people and when we are deprived of this on an involuntary basis our psychology suffers.

We went to see an older lady today, actually 93 years of age who although suffering from arthritis and oedema in her legs was extremely independent, who drove a car, and wanted her garden done front and back. She told us that she still had a hedge trimmer but could not use it because she was not well enough at the moment. I gave her a quote for a job, trimming and mowing front and back, and we agreed a deal. She was very straightforward, and told us that she had had a wonderful father who water up to be honest and straight with people and never lie. She clearly loved her father very deeply and said he was one of the best. This sort of encounter motivates me to be a better human being or should I say keep being a good human being. I must not judge myself ( see above).

This weather doesn’t know what it wants to do. We’ve had a continual grey blanket over the sky for the whole day with spits of rain. I’m definitely a creature of the sunshine and when we next see this strange orb I shall strip down to my shorts to get a blast of Vitamin D boosting sunshine.