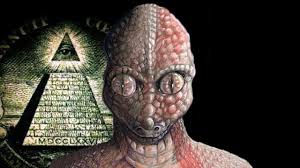 The following type of thinking will be familiar to followers of David Icke who for many years has spoken and written about Archons – artificial machine-like beings who seek to take over the planet. This is not new knowledge.

Ghost In The Machine.

“Like I’ve said many times “they’re turning Earth into their planet.” A low frequency planet that consists of war and suffering. We are a total different species from them we cannot exist on a planet terraformed for them. Look around – we’re all dying of sickness and disease, our children are becoming completely brain damaged robots …wake up humans because we’re running out of time. ”

“The Archons have Terra-formed everything.

Ever hear that you should cure cancer with Chemo-Therapy because you might be the 1 in a million who get’s cured, well sure if you are that 1 Archon out of a million humans. (Ed. – could be more than that)

They are using Chem-Trails to make this planet more hospitable for the Archons.

The Religion of the Archons makes them rich, powerful and wise while our Religions make us stupid, submissive and passive slaves.

Their politics rule the planet, completely in secret, while our politics are nothing but cartoons of puppets with no power.

Their food (GMOs) make them healthy and thin, while it makes us fat, slow and sick.

Their TV (Sci-fi) is informative while our news consist of cartoons, clowns, lies and humor.

Fluoride makes them strong and smart, while it gives us Alzheimer and makes us stupid and cancer ridden and isolated from our higher selves.

Vaccines makes our children autistic and sick while making them more tasty for a Archons breakfast.

The Hepatitis B Vaccine tags our children only 5 hours (neonates) old with nano-bots, the mark of the beast making them the pets of the Archons.

Cell towers and wifi charges their batteries while making us sick with cancers.

Their advertising has symbolism which makes them wise purchasers, while making us submissive emotional idiots of debt.

Plastics (BPA) makes them sexy, while making our women sterile and turning our men into little girls.

Their schools make them executives, while ours make us barely qualified to serve Archons and fools little girl corpses disguised as Mac Donald’s hamburgers.

Aluminum charges the nano-bots that make us sick, submissive and stupid, making us the servant’s of the Archons.

Our wars make the Archons rich behind the scenes, while our religions justify the murders of each other under the banner of war.

You fools say you want your country back, you want this planet back, you want a better life for your children? Well, then Wake Up and fight with the only vote you have left. YOUR INTELLIGENCE, CREATIVITY, LOVE, EMPATHY AND HOW YOU SPEND YOUR MONEY. Stop financing your own Genocide.”

“Each individual must be able to overload their consciousness with pure awareness so that any system regulating their mind through artificial consciousness is similarly overloaded.”

“If you support the liberation of humanity, the truth, compassion, increasing self-awareness and the awakening of the collective human soul then you are beginning to break contractual, manufactured agreements with the fallen collective that currently rules this scripted area of time-space.”

“Without your support of the liberation, you are, by default, supporting the total annihilation of your own species unless you choose to knowingly sell your bloodline over to the dark side for protection. And then, you have to recruit or sacrifice human souls or you will be dropped and then it’s just a waiting period until the One True Creator, the over-soul of the ALL will eventually make corrections to Creation and remove all the destructive tendencies and all the fallen, distorted complex beings that are not in harmony with the One True Spiritual Force of Compassionate Self-Awareness. ”

Have a look at The Liberation of Humanity from the Fallen Spiritual Enslavement System.