In the United Kingdom if not elsewhere men tend not to wear their hearts on their sleeves at least the older generation. I attended a Christian men’s group talk in Frome, at the rugby club no less, together with about 30 other men. We normally start off with a curry after having been refreshed at the bar,  then a word of prayer followed by the speaker. 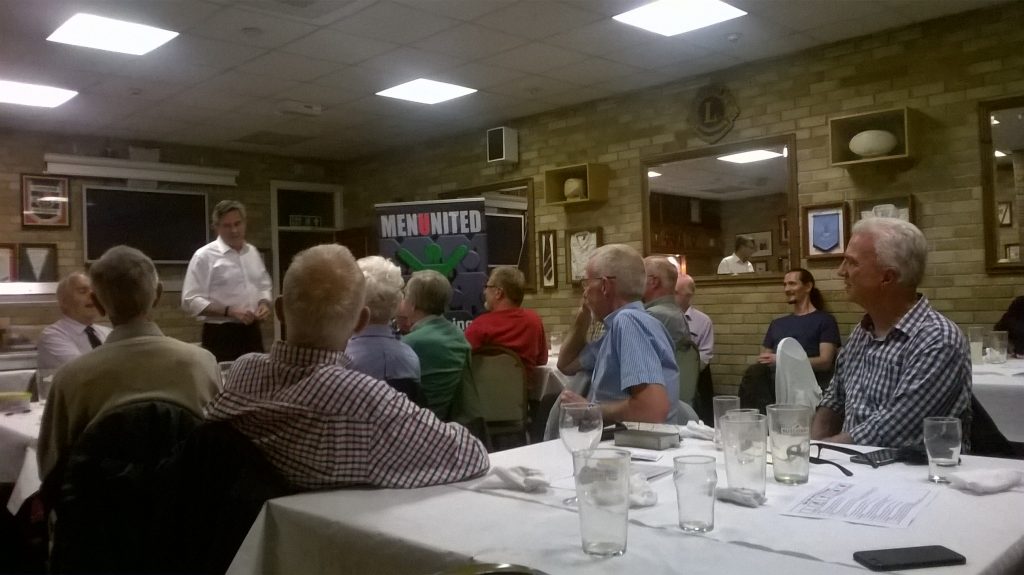 At the moment I landed in the car park, my PAS (power assisted steering), packed up and I learned the hard way how difficult it is to steer a car unassisted, especially when you are hardly moving, and when the weight of the car is so significant. The Volvo V70 is about one and a half tons. There was nothing I could do about it, so I thought to myself that I would not spoil the evening for the sake of a malfunctioning car.

Ironically, the last Volvo I had broke down, just at the time I entered a church car park for a funeral service. Maybe there is a lesson somewhere.

We sat down at tables for eight and amazingly I sat at a table with four people who were from South Africa. In view of my love for that country this is extraordinary. Sometimes you can’t make it up.

Last evening’s speaker was a management consultant who assured us that people who work in the position of CEO’s most definitely do not know what they are doing most of the time and feel lonely because there is no one they can turn to.

He started his talk on the surprising topic of gadgets, particularly his own beloved  robotic mower that he had bought and which mows the lawn automatically at 7 AM each morning. He and his neighbour are in a friendly rivalry to see who can produce the best lawn. The topic moved to how to sell a service to other people. You most certainly do not say to someone “I have got what you need.” It has to be through the asking of questions, the curiosity, of the possible client. The client needs to feel that you are speaking to them for the sake of speaking to them and not for some ulterior motive. In a way, ‘selling’ Christianity, for that is what it is, is educing a change in mindset of someone else where you have to follow the rules just like selling anything else.

On five occasions, the speaker asked us to stand up and move to speak with someone the we had not spoken to before. He gave us a particular question to discuss, for example ‘how did it feel to acquire your latest gadget?’.  This is 1 million times better than having people sitting in separate rows listening to material, however good. I think the human impulse to take part in something is very strong. That is why I think the prime duty of a speaker is to put himself at the service of the audience. I think that at the end of a busy day, concentration is very limited so people don’t want heavy stuff. We were given information in byte-size pieces – easy to digest.

When I went to check my car and possibly to call the AA , it started and drove without complaint or murmur so obviously some temporary thing, maybe a combination of speed, braking, ambient temperature, caused a mandatory dysfunction but when I tried it this morning, it seemed perfectly fine.

Today, more excitement. I’m taking my friends to see Tim when suddenly the whole electrics of the car cut out again. The engine went off when I was driving at about 20 miles an hour. The brakes did not work, the steering became heavy. Fortunately, the destination was at the bottom of the hill so I just made it down but was only able to stop the car with vigorous pulling at the handbrake.

Enter the RAC man, a jolly young fellow with a back problems so it turned out. He could not find a problem because it started for him the first time. Françoise, however, lost confidence in the car because she does not like the thought of it breaking down when she is in control. We asked for the car to be taken to the garage to sit over the weekend and be given attention next week. This is the most inconvenient weekend of all. We hope to go to a traditional country fair tomorrow, Saturday, but alas the garage has no spare car at the moment.

Anyway, we count our blessings. The car did not break down when we were going at speed and everyone was safe and my brother-in-law had a very good session with Tim.

To home, enjoying the hot sun, make a meal and sit and watch TV.