This morning I rose early, around 5:30 AM, to one of the most spectacular dawn choruses I’ve heard for some time. A multitude of birds, a wonderful orchestra which set me off for the day.  After making an excellent coffee which I sweeten with coconut oil not sugar, which I now find makes me sick followed by a quick glance at the paper and onto my computer. I have been given the name of a great site which reports on the actual news without bias. This reinforces my feeling that to watch the mainstream media, particularly the BBC, is carcinogenic to the soul.

Anyway, in the Christian calendar this is an important date, Good Friday, when we remember the death of Jesus on the cross. To commemorate this,  my wife made some excellent cross buns. They are so unlike the examples you buy in the bakery shop. There is so little to then that they bounce. These are the real thing, a cross between a cake and a loaf of bread and one half of them is enough to keep you going with a nice cuppa tea, provided there is a good dollop of jam on top. 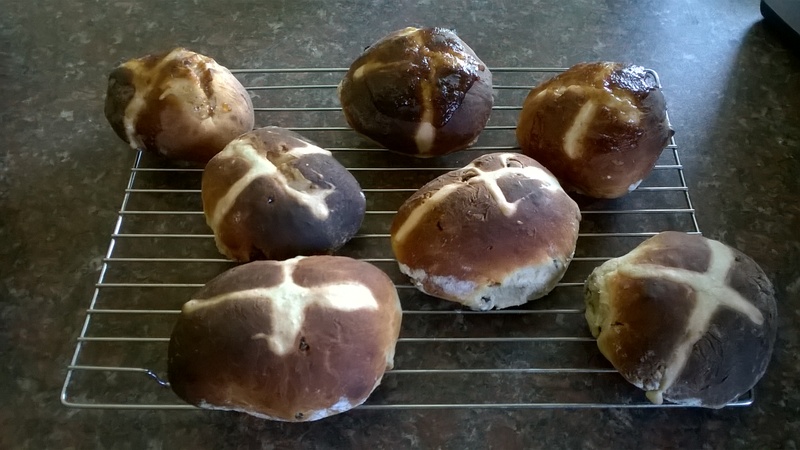 Today, I spent most of the time searching of material for my Corona site which is consuming me at the moment, in the nicest possible way I should say. I was comforted to see that Christopher Hitchens was a well-known journalist found that even he was insulted and ridiculed for bringing up the question about whether it was wise for this country to go on a lockdown. He does not see any hope for the future because we do not have people of sufficient calibre in the government with the experience and knowledge to know what to do.

This was the text of a news letter I sent to the people who had expressed a positive interest in my excursion into the world of viruses.

Dear friends,
I am mailing you because you communicated with me in a positive way, all 56 of you, about my previous communications. If you do not wish to be included in future mailings just let me know.
I awoke early today Good Friday at 5:30 AM.  I listened to the most glorious dawn chorus I have heard for some time. There were pigeons (much as I dislike them), seagulls, cuckoos and so many other types of bird making a wonderful symphony orchestra and this started the day off in the right way.
I sometimes wonder where I get the energy from to keep going in these dystopian days but I have learned that if I focus on the needs and the value of other people, energy is automatically supplied and I never run out of it. This morning already (9.30am) I have entered 10 new links to today’s latest news of the virus plus comments about it. I’m in the privileged position of getting a good overview of what is going on – and just as important what is not going being said – so here we go:
There are two parallel tracks of information in this world. The first one is run by those 1%  behind the scenes who think they control the planet, or a least have right to control the planet and the second track consists of the information that the mainstream media feels we can be told. The second track also consists of those fighting for the cause of truth such as ourselves. It is the desire of the controllers that the two tracks do not meet. David Icke has had recent experience of what people do to his material and attack him when the boundaries are challenged.
Unless you understand the back story to this whole corona business, you won’t understand anything at all. The whole thing is based on making the population as fearful as possible so they almost beg to be released from their torment by wonderful vaccinations and later on by micro-chipping, a cashless cconomy, not to mention central control and the abolition of borders.
>politically correct people close your eyes now< I also find it helps to have a faith and my particular version is Christianity which I find the ultimate ‘software manual’ for human behavior and a comfort in times of stress. I find myself looking forward to each day wondering what I can do for the greater good. You cannot fake this sort of thing. If you try and take refuge in the left brain, that has nothing to offer you except “300 ways that I have been hurt and misunderstood” plus imaginary threats and scenarios in the future. The left brain has no visionary status unlike the neocortex that loves having visions for breakfast, lunch and tea. Calcified pineal glands are not your friend but that’s another story. >danger zone over<

Back to topic: It is amazing how all the world’s governments agreed on for example a distance of 2 m between people. what happens if there is even a breath of wind. The material could get carried 10 m. This is in a world where countries seldom agree about anything but magically, 2m is the gold standard. Of course it has nothing to do with having a dress rehearsal meeting a few weeks before the virus broke out (201) overseen by the beneficent Bill Gates with no vested interests
Is there any logical or scientific experimentation behind the 2 m rule, and why was it called social distancing not physical distancing. Is this an indication that these pesky human beings are being too human for their own good? I mean, we can’t have people having feelings for each other, expressing emotion, because in the forthcoming world of artificial intelligence these features will have no place.
You don’t have to listen to UKcolumn with their thrice weekly broadcasts to know that statistics can be fiddled and that is the main problem, the main problem that we are aware of anyway. I feel that countries exert some pressure on other countries. Very biased scientists such as Niall Ferguson of Imperial College (funded by the Bill and Melinda Gates foundation) make the most wild prophecies of deaths based on faulty computer models and then revise them down and down when the absurdity becomes more and more obvious.
Apart from this chicanery there is a certain political aspect to the figures in that authorities have been told to ascribe a death to a virus even if only it’s component parts are present. “Oh well let’s put it down to Corona” is the approach that many people are taking.  I refer you a video on my website, Dr Andrew Kaufman, M.D., who systematically dismantles the whole identity thing and even questions whether we are looking at a genuine virus or whether it is just an inference that in the presence of certain markers the virus exists. Clue : exosomes.
I am fascinated how David Icke’s down-to-earth talk with LondonReal had such a huge effect which is a great compliment to him and his courage (so what’s new). It has been copied and shared about 4 million times. Youtube is quickly losing its reputation; other platforms are being sought as a plan B if and when You tube follows ‘their community guidelines’ and removes material offensive to the NEW WORLD ORDER and of course to the BBC with their wonderfully balanced 20 4/7 fear mongering.
Funny, we never hear  on the BBC from the doctors who think we are exaggerating the whole situation nor do we hear from nutritionists about the value of vitamin C and other substances. The pharmaceutical industry need people whose immune systems are compromised in order to profit and that’s why they are banning natural medicine simply to maximise profits.
Yes, I know you know that already, but it does well to say it again.
The lock down is probably the worst model for preventing a work-through of the virus which many say is akin to the common cold and as we were reminded by the UK government itself late on in March, the alarm has been reduced to a normal level. It is a comment on the corruption of the press that this was not mentioned but then again if you want to sell newspapers then fear sells. boom boom. Their advertising revenue is down 80% so who cn blame them.
I do not think the lock down will last beyond the end of this month, and that’s just my opinion, because when firms have paid out the monthly salary cheques there will be very little left in the kitty so the pressure on the government will increase.  Also, bankruptcies will increase enormously and we will be left without any high street activity if we are not careful.
As for people being afraid, I find the fear is much less among people under 30 including belief in the need for a lock down but when you get to the over 60s they are in the mindset of believing everything they hear including the doctor including the BBC and these are the most difficult for me to talk to. I function as a gardener to learn my daily bread (free therapy for me working in nature) and most of the older people are too traumatised even to talk about it never mind mentioning the immune system, fake figures etc.

Outside Tescos, Midsomer Norton at 11am yesterday queuing obediently. amazing what a yellow hi viz jacket does.  Thursday 9th April
You could almost see them switch off so I have found that the best approach with them is to play the game, ‘be afraid’, assure them that they won’t die and even this is difficult and just get on with the job. Some people queueing outside supermarkets, it is said that we invented the queue so we mustn’t complain if we have to being one. The staff are interpreting what they are told from head office so ranting at them even politely is a waste of time. They probably hate what they have to do as much as we hate it
So, it’s a waiting game. I go out and about as I please and if anyone asks me I tell them it’s a recreational walk, my exercise for the day, on the way to do shopping, but the funny thing is there are no police around here and they are probably too worried about themselves to be too aggressive in case they have to touch the people they have to arrest.
Talk about smoke and mirrors, but at the end of the day, the more you know the less afraid you are. I can put my hand on my heart and say that I’m not afraid at all and in fact as I said above I look forward to each and every day, especially as I can see the clear blue sky out of my office window. Please visit my corona section. You will read material there that you will not find elsewhere due to Google’s algorithms which are becoming more corrupt by the week.
https://www.5gexposed.com/the-corona-virus/
So one more time, knowledge brings freedom (from fear) or as someone said ‘perfect love casts out fear.
Those who do not have the knowledge will eventually be happily lining up for the compulsory vaccination jab which will be happening for example in Denmark and probably America and later in the UK and also when the time comes happily receiving a microchip because they are told that ‘it is for their own good’.
What could be more transparent than that.
Lots of love … and hugs (later)
Brian