Most of our beneficial interactions are unplanned and unintended. You just turn up to an event, not knowing a single soul, and then you meet someone you have something in common with. This was indeed the case in the Mendip Society ramble or walk which was on the Somerset levels on this occasion. We spotted it in the “Mendip Times” in the morning and it sounded good so we thought, why not?

Due mainly to the fine weather, 30 of us gathered together at 2 PM on sunny summer afternoon and after a brief explanation of the nature and function of the reserves over the millennia off we went. The good thing about guided rambles is that the leader has been round the course before so there is no question of wasting time on blind alleys and cul-de-sacs. 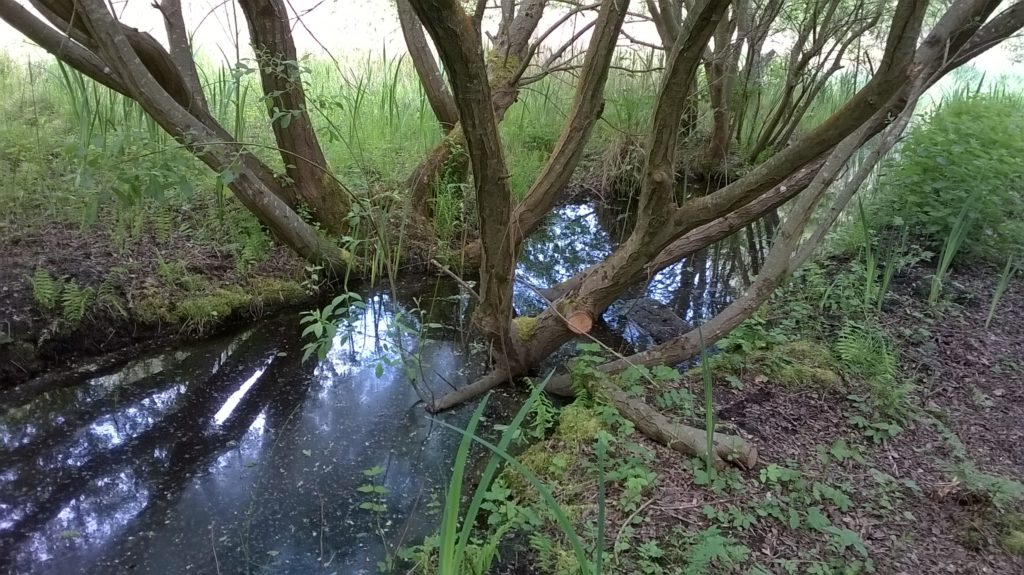 The walk, 5 miles in length, encompassed areas of the Somerset levels that had been occupied 3000 years ago by people who derived their living from this watery place that was once under the sea. Buried sea-shells to prove it. 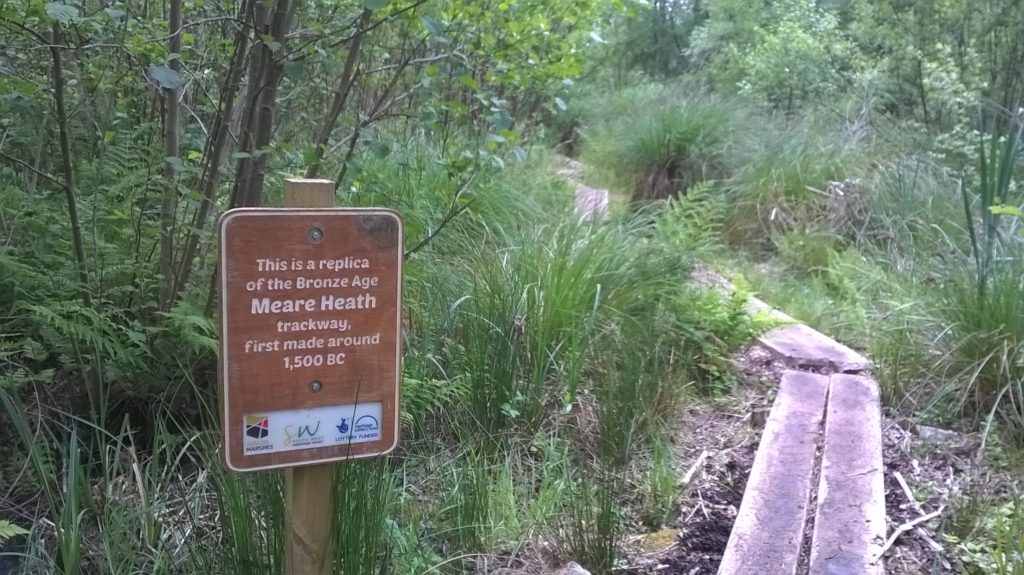 You can say that rambles are self organising social clubs. You show up / turn up / pitch up/  rock up – take your choice according to the slang of your country on your own or with a friend. Whoever ends up beside you provides an opportunity to chat. If nothing much happens it does not matter as you can just drift off and talk to the next person. No hard feelings, no embarrassment. I would suggest this is the ideal way for a newcomer to an area to get to know people.

I met a chap who was obsessed by gadgets and we had a discussion about his multifunctional Ipad. It could identify various birds from the noises they made and would wake him up in the morning asking him if he wanted the radio on. Now, there is service for you.

I had another chat with someone who was the new Webmaster for the society and we discussed how to best handle the mailing list. I told him about Mailchimp and how easy it was to use I reminded him that it was free.

I fell in with a lady by the name of Carolyn who was a performance artist and photographer. She goes to Colombo in Sri Lanka every year to give performances, and her daughter lives on the south-east coast. She is a fan of Instagram and posts photographs which people follow. This seems a very transitory environment to me as you follow someone based on the sight of a particular photograph. I think it’s entry-level stuff into the Internet and blogs but I don’t want to knock it in any way because good photography is an art form and it’s a lovely thing to share it. 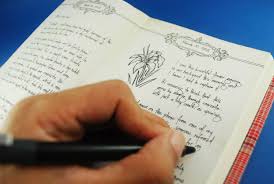 I do want to spread the idea that everybody should write their own diaries and I have submitted an article to the local paper which hopefully should appear next Wednesday. Let’s see if it’s brings any response. By “response”, I mean visited the page.  I use a stats program on all my sites which means that I can see whether someone has viewed, roughly where are they are from, what pages they looked at, and how long they stayed on the site. I’m very thrilled that so far I have had two or three very complimentary comments from thoughtful souls. I don’t expect all that much from this geographical area in which I live because it has no literary heritage, being an ex-coal mining town and indeed a place where many large printing firms were based. Now it is mainly for commuters and retired people alas.

About analytics software if anyone is interested you always have Google Analytics and my own favourite statcounter.com which tells more about the visitor. Both free but statcounter gives limited historical data without upgrade.

With regard to my blog site, boringly, people have to register before they can post, otherwise the site gets invaded by thousands of robots and uses the opportunity to post something to advertise a sex site or a quick making of money offer and I don’t think most of my readers want that sort of thing. 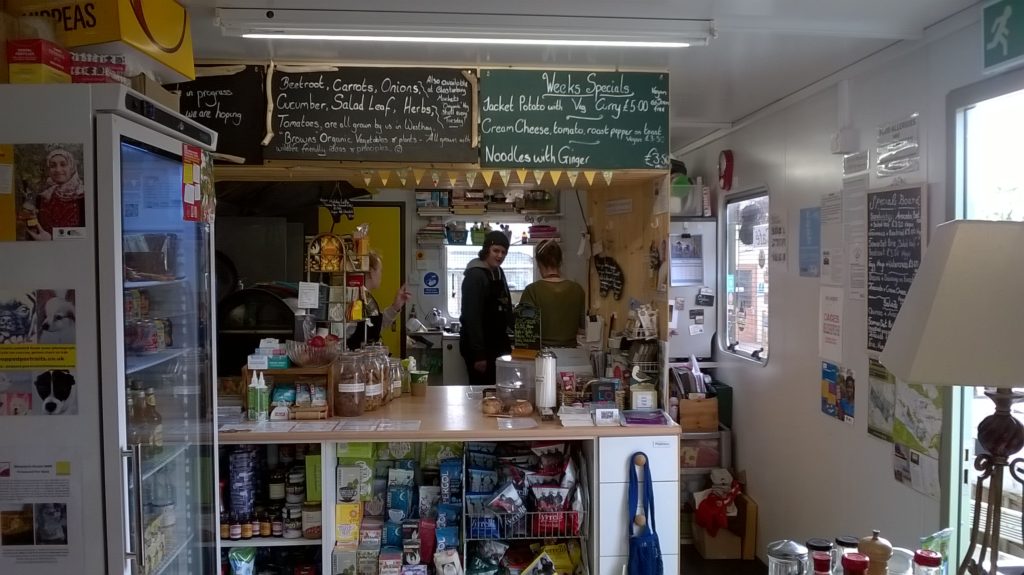 We finished the day in the splendid Eco Friendly Shop full of good food and drink – homemade of course  – and I rested my sore back and drank a good coffee – a cafeteria – which the proprietor kindly supplied. Highly recommended. BA6 9TT in case you want to visit.

I was invited by my local men’s group to come along as a guest to a supper evening in the local rugby club here in Midsomer Norton where there was an entertainer called Tom. He was from Stroud in Gloucestershire and hoped to become a full-time entertainer and evangelist in October. he came and joined us at our table for a meal. I found him transparent, unaffected, glad to answer details about his life and his faith, and able to listen.

I told him something about the program I saw on BBC four about Ken Dodd’s life and health care in felt at the end of free shows that he could have done better but he said, in spite of these doubts, “you just go on and do it anyway”. The Liverpudlian entertainer of 53 years experience said “You know that the audience want you to succeed”. he was asked if he ever gave performances with other people to which he said he did sometimes but when working on his own he said “I never give a solo performance; it’s me and the audience”. He says he much prefers working with a live audience instead of ‘staring at wires’ as he calls a studio performance 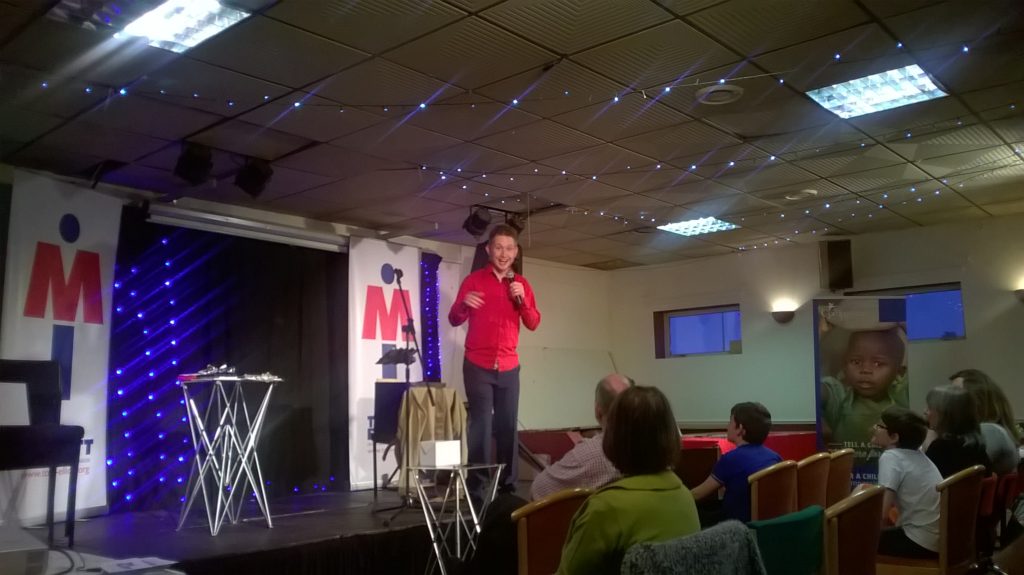 Tom was introduced and he went on stage to give his show which lasted about 50 min I think.  I give him 10 out of 10 for enthusiasm but only 5/10 for presentation. It is essential that self taught entertainers no matter how talented receive mentoring from an experienced person and if necessary pay for it.

The first problem was that he invited one person from the audience up on the stage called Melissa to help him with his various tricks. Although there were 40 people in the audience he called her up three more times which I almost considered an invasion of privacy. The idea is to involve the maximum number of people you can.

The second problem was of the microphone or rather the volume was far too high and he screamed into it deafening everyone. I had to retreat to the back of the room but even then there was no escape from the noise level.

The third problem was that he criticised in a joking way people who did not cooperate by saying “it’s my show”. You can make the same joke maybe two or three times but I think he did it about 12 times and it just wore a bit thin.

The fourth problem was that he asked people to applaud members of the audience who did the slightest thing such as standing up, walking forward, taking part in the simplest of instructions. “give them a round of applause” he shouted at full volume. The audience duly obliged but really it was going over the top.

The fifth problem was that the said of someone’s husband that they had a forgettable face. Even when said in fun, that could be really hurtful especially if the man was lacking in confidence as indeed he seemed to be.

His magic was good. He took someone’s mobile phone off them and made it reappear from a packet of Cringles. His humour was not off-colour and actually rather quaint and oddball and I found this attractive.

Halfway through, he invited people to fill in a card with their name address and phone number to say if they were interested in committing themselves to Jesus. I really don’t mind this because everyone came along knowing that it was a Christian thing. About 25 people filled in the cards. I wonder how appropriate it is to mix comedy and magic with selling your DVDs and asking to support children in Africa and encouraging people to commit themselves spiritually.

He drives all over the country doing his show and I think the sheer enthusiasm that radiates from him wins the day. He is going to speak to 500 Salvation Army people in Harrogate, and then do the same thing again with 500 more.

I shall write to him about these points and hope that he takes some notice though human pride tends to dismiss criticism as if it is some sort of insult on the persons virility. It’s just an observation mate – nothing more –  take it or leave it.

PS I visited his website and had a look at the contact page. As you can see, the contact form is almost invisible because the default font colour is a very light shade of grey. It is absolutely vital when making a website to find someone who is outside the field, intelligent, and not afraid to report what they find. It is called beta testing. They should go through every aspect of the site because as the old saying goes “a change is as strong as the weakest link”. The very people who need the service most may be the ones who are most timid and therefore most likely to be put off by difficulties in the website.