A varied, challenging and entertaining day ending in style with Pepys playing a wind instrument in his garden under the moonlight.

A truly mixed bag from me today. It is the Tall Ships Exhibition in Bristol today so naturally the heavens open. 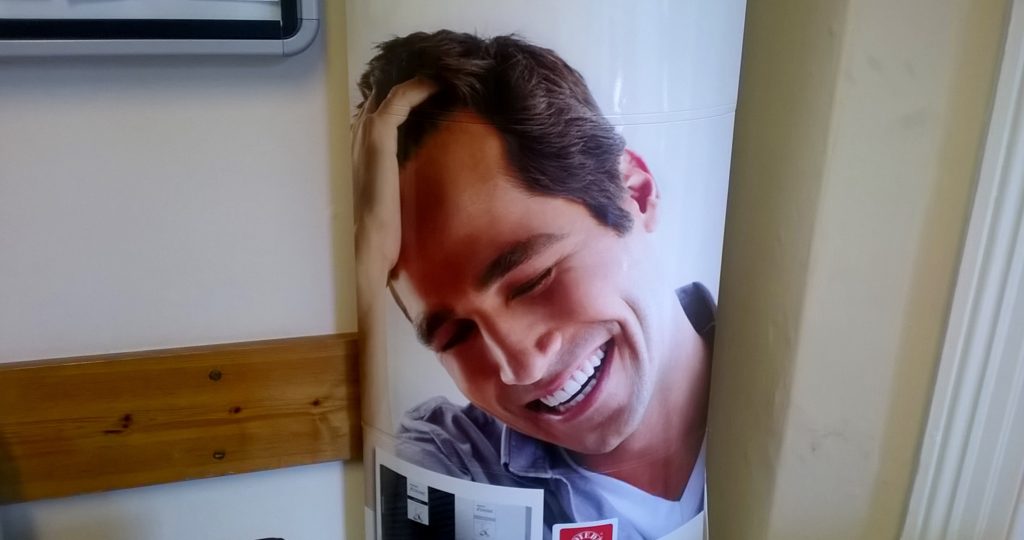 Yesterday I visited my dentist for what must be the 18th appointment to have my teeth completely redesigned. I absolutely hate the image above. Does anyone know any real human being who grins with their eyes closed. The slogan is “get your best smile at the right time”.

Today I received an actual letter from a person who I have not met for about 10 years. I was delighted to read it for a number of reasons. First it contained real news relevant to myself and secondly it was a lengthy letter full of description in which I could participate visually. I believe that I can detect whether someone’s heart is in what they write not so much from the words but from what comes across. In other words, it’s an energy thing.

As the gardening, I have perfected a set of tools to do clearing and hedge cutting as mentioned in my recent diary. I find streaming rather a violent activity, very crude in its effect. I use my extended hedge trimmer as a strimmer. I walked gently sideways and cut a swathe of grass about 2 feet wide. Combined with knowing afterwards it makes a wonderful effect in very little time but gently does it. It’s very good doing it to meditation.

I am taking a friend tonight to see the film Baby Driver again. I don’t know whether to worry about my state of mind. It was not the violence of the film but the fact that my friend is petrol head and he will love it. He loves video games featuring car chases so I could not resist inviting him. Anyway, I don’t have to be defensive. It’s a brilliant bit of art. Well done director Edgar Wright.

I must move homes. No, only joking. I’m just running out of space for my books. I love each and every one of my books. I do not want to be parted from them. Each one of them has a character and a place in my life even if I have read only the first few chapters.

‘The Week’ is a weekly summary of all the news items of note which in theory saves you reading the papers. There is a section entitled “it must be true – I read it in the tabloids”. They are all funny but one took my eye in particular: “a man who got trapped in an ATM machine was rescued after sending an SOS out with the cash. The engineer was working on repairs when he got stuck in the vault (the machine itself), in Texas, without a phone. First he tried shouting, but customers ignored him. So he scrawled a message on a scrap of paper, and slipped it out of the receipt slot. The police were then called and kicked the door down”

I am due to give a talk to the hospital board of North Bristol in early September. I don’t think some of the doctors and consultants are aware that the plan of Jeremy Hunt the Health Secretary is actually to privatise the NHS. The plan is already in motion. I remember for six consecutive days last winter the message given out by the main stream media was that the hospitals were in chaos and not coping. I read a recent article in the Independent saying that every doctor knows someone or has themselves had thoughts of suicide. All this is designed to get the public to accept that the present system is broken.

American corporations have been dying to get their hands on the NHS for decades now and Jeremy Hunt is their doorway. The American personality type is predominantly the psychopathic. Words like “compassion”, “caring”,”community” completely devoid of meaning to the psychopathic mind. American companies routinely lie in order to get what they want when it comes to a takeover bid. They offer terms that are too good to be true, getting as the cheapest tender, and then breaking in the millions from long-term contracts which the Brits in particular are naive enough to sign. The rule is quite simple: if an American executive opens his or her mouth in a negotiating meeting it is either a lie, a half lie, or a meaningless slogan designed to dull the senses of the opposition. Lying is just part of the way of doing business and getting what you want. Contrition is displayed, mechanically and without feeling, when they are found out and then they just move on. it amuses me how politicians speak about ‘mis-speaking’ when they mean lying.  Alas, Hunt is in this category.  Those who expect him to exhibit feelings of nationalism or national pride will be disappointed. Those who trust in him to serve their best interests will be even more disappointed. I feel like saying to the doctors, for your own health and safety always have Plan B. Your skills will always be needed the question is do you need to be treated like a creature on a treadmill.

Yesterday, I was excited when my friend from Cyprus was moved to write to me about the problem I had removing myself from a particular situation. The words just came into her head. They were of a particular quality and poetry that in her normal state she would not have been able to utter. Because of this, and because of the common sense of what she was saying, I took full note and much comfort from her words. So, two genuine communications in 24-hours.  Whatever next?

Today I received from Amazon a book by John Taylor Gatto called “Dumbing Us Down”. The subtitle is  “the hidden curriculum of compulsory schooling”. It is an easy read and a difficult read. This book has 106 pages of generously sized and spaced type but the content thieves dynamite. It is six hours after I received it and I’ve got 20 pages to go. John talks about the suppressive nature of an institution that encourages uniformity and conformity at the expense of the individual being free to express his or her thoughts. His hypothesis is that they are being trained to be mindless operators, almost like George Orwell’s  1984. John has taken some of the most difficult children and infuse them with ideas which have  in some cases bore fruit many years later.

Disadvantaged children require encouragement more than anything else and his words and actions have changed the lives of many. This man is one of the last courageous great teachers of children and I can only recommend this volume.

So, any teachers or potential teachers out there, read this book.