We might as well celebrate Sunday in the right way. These are church bells summoning people to morning service which was also a baptism. Regular readers will notice that this happens once a month. I was very impressed by the number of congregants obviously related to the very popular couple who were baptising their child Edith. 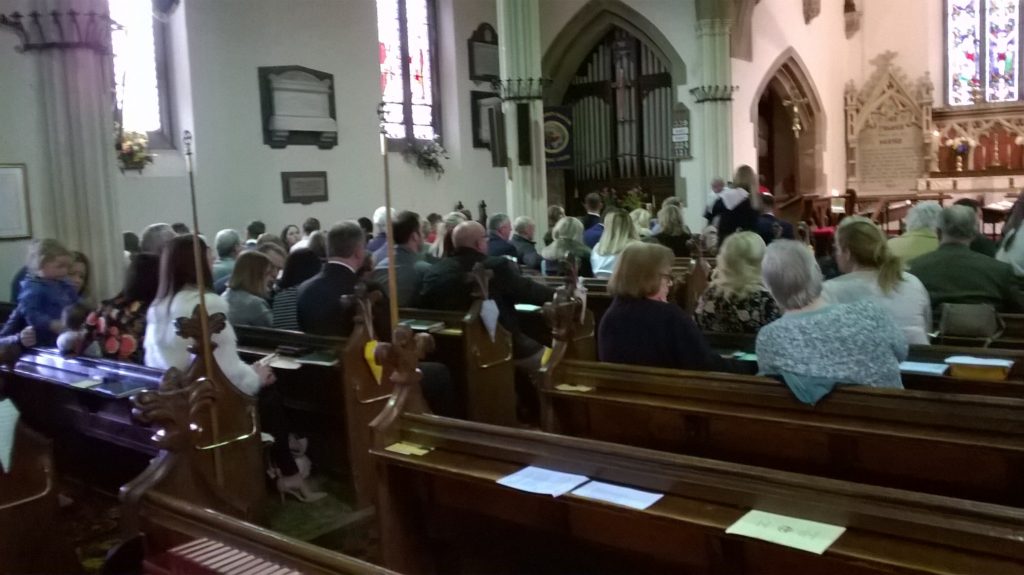 All the people on the left aisle were related to the couple called Tom and Katie and the people on the right were the “usual suspects” i.e. members of the congregation. My favourite subject – children. There were three noisy children but one of them went into the closed room at the back and settled down. The child to be baptised alternated between crying and sleeping. The crying was actually quite pleasant, not screeching but just a gentle cry. It’s easy to switch off this sound and allow people to do what they have to do.

The preacher gave quite a good sermon reminding us that people when baptised with the holy spirit become all as one. This is the ultimate wavelength conjoiner, from which the feeling of eternal unity arises. This happens via the neocortical part of the brain. Unity can also happen when the reptile brain is linked in which case violence and aggression is the product.  The sermon was delivered to people who will probably not attend church again for some time and the celebrant was wise enough to comment on his own personal journey of faith when the idea that Jesus died for him struck him “in a flash”. I think that’s probably when you go out of time and realise your eternal self

The preacher also reminded us of the golden rule – do unto others as you would be done by –  or treat others as you would be treated. He reminded us of the gospel of today, Doubting Thomas who would not believe Jesus returned unless he put his hands in his wounds. Jesus gently rebuked Thomas by saying ‘blessed are those who believe without seeing’.

After all the baptism party had left the hard-core congregants were left to have further deliberations, as it happened in the form of an Annual General Meeting. The vicar announced the meeting by saying “let us commence”. I pondered on the difference between the word commencement and start .

We start a race we do not commence it.
The ceremony will commence at noon.
The meeting will begin immediately.
The story begins here.
Let battle commence.
What time does the film start.
Please start your meal.
They began their relationship last year
We commence the degree ceremony

In case there are any Tamil speakers reading this diary

In the order of informality to grandness,  I would have thought start, begin, commencement. Start applies to the most ordinary mundane matters of life.  Begin is more gentle and commence is more formal

It is clear that the whole church is run by a few willing souls who have the instinct that they are an essential part of keeping quite a small electoral roll of 48 people happy and serviced. The vicar cannot survive without help. 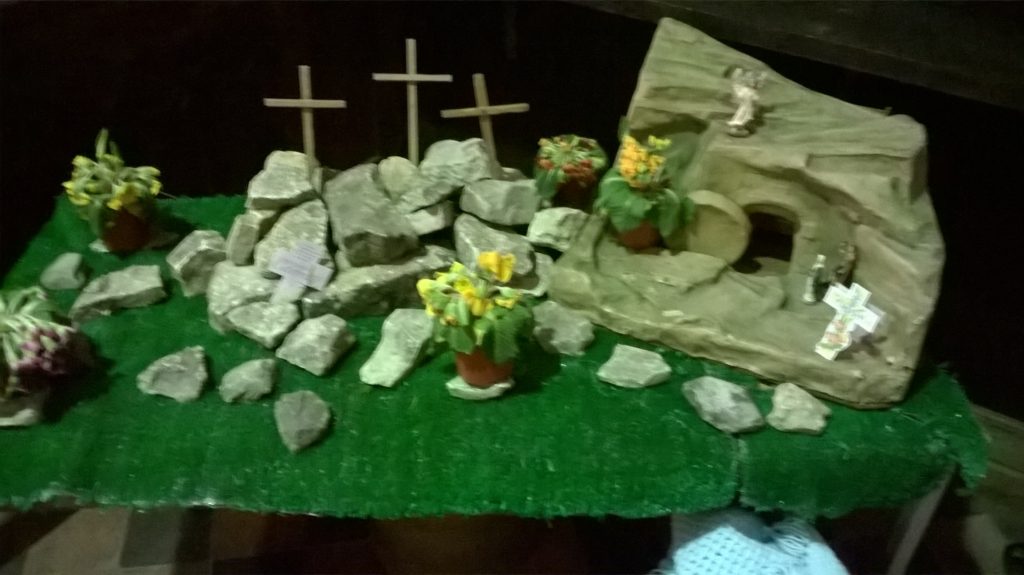 On the way out I noticed a very evocative tableau, that is the tomb of Jesus with the stone rolled aside.

I’m getting on with Facebook better than I thought. A woman from the USA came on as a new member with a great deal of problems, completely drained of energy, has a husband with cancer, abuse and the family, you name it – everything wrong.  I immediately knew that I had to do something so right away so I wrote to her, not knowing what I was going to write about. I can say that when I go into my state that the order in which I write things is not preordained, preformatted, or anything it just comes out, one sentence comes to another and before I know I’ve written some advice which looks fairly reasonable.

I had a lovely exchange when she suddenly got the idea

I wrote: can I just put it to you that craving it is a sort of addiction. I think you are looking for self-healing but possibly going about its slightly the wrong way. I like it when you propose your own answer that you need to step back and recharge. Things are always easier to say than to do. Please do not beat yourself in any manner shape or form. I honestly believe you have done your best and one thing led to another a bit like falling down a slippery slope but you are not the slope itself. Eh?

The enquiring member wrote:  BINGO…I get what you’re saying..Just hearing this brought so much emotions up..it’s overwhelming….Thank You so very much..Sometimes we just need to hear what we already know from someone else.

It is this breakthrough moment that is so key and I feel that the burden lifted from her soul at that point. You never know when it is going to happen because it gives no advance warning.   This sort of thing gives an extra dimension to my day. I’m going to get FB sorted and use it as a platform. 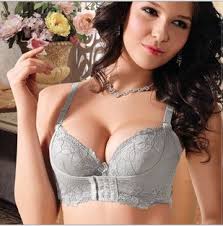 There is good and bad in every group; I’ve had a series of friend requests from young girls with rather large bosoms asking me how I am and where I live. They are all resident in the USA or Nigeria for some reason.

I somehow think that they and I are not on the same wavelength apart from the fact that I’m 50 years older than most of them. I have devised as Baldrick would say ‘a cunning plan’.

I deal with their ‘hello’ by responding in Urdu. For example, this is Urdu for ” I don’t think it’s a very good idea that we communicate”  مجھے نہیں لگتا کہ یہ ایک اچھا خیال ہے کہ ہم  This is an intelligence test because they have got to figure out what language it is by using Google and then get it translated to English. If that doesn’t put them off then nothing will.

One more thing before I close. Here is a brand new FB member joining our group.

Thank you for allowing me to join this group. I usually observe first and then open up and that’s even a rarity these days. I’m finding more and more answers as to why I struggle so much with pain..not just physical yet emotional and spiritual. I hide behind my phone and I only talk to few as it is yet I can’t seem to either stop the drowning or control what I take on. I know it sounds crazy yet that’s how I feel most days, crazy yet smart, loving yet full of rage, honest brutally honest which most take the wrong way. With all this being said, I’m here to learn and to possibly find some kind of peace.. I hope all is having a most wonderful day!! Again, thank you for allowing me to join