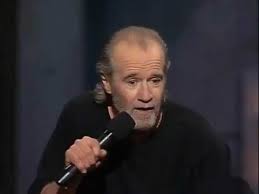 They don’t make them like him any more. I have just been watching George Carlin (1937-2008) on Youtube. For those of you who don’t know who this chap is, he is or was an American comedian who says it straight. He hates political correctness, euphemisms, lying politicians. The colour of his language would not be tolerated on TV today. However, I find his input reminiscent of an age when people actually said what they thought. In this day and age, people are too scared even to think of fear of upsetting people.  In case you haven’t realised, I do not fall into this category. This is him talking about the fear of germs.

You will notice, dear people, that the language is not elegant but it does smash through the hypocrisy and the double speak with which I’m so sick or is it of which I’m so sick. I will call today “sincerity day” or “we will do whatever we want and not even bothered to go out” day. The weather has been cooperative by being alternately grey and rainy so there has been no incentive to do what is commonly regarded as healthy, take exercise. I’ve always been against such practices. I see people running along the street, damaging knee ligaments on the hard pavement, showing all the signs of discomfort such as sweating and agonised expressions. Why do they do it? Grass is kinder.

The reason I’m writing this section is because we are called upon to do mail outs to other people from time to time and it is as well to bear a few things in mind before doing so. These thoughts are not directed against anyone but about situations that can arise. In other words, it is not personal.

Yesterday I received a newsletter from a firm that is respectable and traditional and with whom I place some of my savings in order to get a decent return. When I click their newsletter link, I have learned to prepare myself for faux-pas of various types and they did not disappoint. On this occasion as the saying goes ‘I don’t know whether to laugh or cry’.

This time the company have excelled themselves. A new man has been appointed as the company CEO. I have no reason to doubt his excellent character and ability. On the front page of the newsletter we see his picture (as below).  When I saw it, this image filled me with confidence. However, this abruptly changed. When you click on the link asking for information this man is transformed into someone who is barely recognisable as the said person (see ‘version 2’ below).

Now my dear people, spot the difference. First of all, you have to look twice to see whether they are the same people because the second person has magically grown a beard and is wearing different glasses. I wonder how far apart in time these photographs were taken.

The more perceptive ones amongst us may say that the generally good effect of the adequately photographed first image has been negated by the second example. I would call it ‘diffident’ but please note I have never met him so I am just talking about my initial impression.

People receive and process subliminal information from a photograph automatically, so what impression is being given to those who have never met the person concerned? I will leave it to you the reader to decide that for yourself. 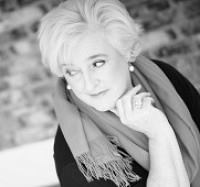 Whilst I am on the topic of the visual image, here is another prize one from the same newsletter. This is not a model posing for a photo shoot in the 1960’s but someone who is going to be a ‘Chapter Development Manager’. It’s like someone has phoned up the subject and said “can you send me a photograph of yourself, any old one will do”. Professionally, it won’t.

First impressions count and if we are too close to the subject matter we cannot see what we are doing and what the effect it might have. A professional photographer would have been a good investment. In public relations, it’s not how you think you will be seen but how you are actually seen which matters.

It is always worth giving your copy or advert someone else to see if they understand it and like it before sending it out to all the valuable customers. It is not a sign of weakness, but a sign of wisdom. No one can see everything all at once from all angles.

There is another point to help everyone who sends such e-mails. This missive arrived on Friday evening at about 6:30 PM. If you want to pick a bad time for sending something then this takes the biscuit. Most people switch off for the weekend on Friday afternoon and by the time Monday morning comes this e-mail would have been buried under a mountain of important e-mail, urgent e-mail, spam, interesting but unimportant mail and the likelihood that it will be noticed never mind read will be very small.

Whilst we’re on the subject, people are used to reading newspapers which have a width of between 50 and 80 characters including spaces. Asking people to read long lines print is not a good idea. They will not read it. The writer should  consider what they really need to say because in case of the need for clarification the reader can follow up with any questions. You don’t have to say everything every time in one communication.

In the famous jargon of the BBC when talking to anyone about anything   “How does it feel?” I ask myself contemplating the above.

In a way I’m sorry I had to write in this vein. I am reduced to frustration because the company does a good job and I don’t understand why they self sabotage by lack of oversight of their publicity arm.  If I did not have respect for the company, I wouldn’t get so exercised by seeing such amateurish work.

Perhaps I should just join the uncritical majority and ignore it, but what sort of service would that be and to whom?

I’ve just been watching a film lasting no less than 3h 8mins elegantly called “Touchless Torture“. This is about the development of techniques by various governments to find ways of controlling us. They do this by intercepting our brain using as the entry point. Methods contemplated or using signals bounced off the earth and from the forthcoming 5G towers of which another 20,000 are going to be installed in California. Completely unnecessary for mobile phone signals instead designed as a control mechanism. The film also talks about nano bots which are particles the size of dust which are programmed to meld with our body and turn us into controllable organisms. Most of this technology is decades old but the powers that be choose to keep it to themselves.

There are some really terrible things going on in the world. Most of the population prefer to keep their eyes firmly closed and ignore anything that is not comfortable to them. They will discover too late the truth behind the screen. Those familiar with the Georgia Guidestones (look it up on Google if you wish) show the intention to reduce the population to 500,000,000 in other words cull 95% of it. This idea can only have been conceived by psychopaths but if you look at the type of people running this world it is not so difficult to believe.

The much reviled but successful David Icke has had a 100% record of prophecies made over the last 25 years coming true and he has more courage in his little finger than most other people have in their whole body including journalists and the mainstream media or shall we call them the lamestream media perhaps. That is one of the reasons that I admire George Carlin so much. if we had more like him, the politicians and the System would not get away with systematically lying to us.

This afternoon, we had a nice self-pampering day when we built up the fire from the wood we collected yesterday and made a roaring fire. While we had lunch we watched TV and then slumped on the settees to have a snooze. I gave myself a nice bonus of deciding not to take up a commission for someone who wanted me to do a new website for them. I decided that I neither liked or trusted them and why should I do work albeit well paid for people I don’t like. I am after all 73 and if I can’t pick and choose at my age then that’s a pretty poor prognosis for the future. It is the same with gardening.

When I work for someone that is appreciative, that attitude actually feeds me with energy because I so much enjoy giving pleasure to someone else both personally and professionally. I walked away from about four job ‘offers’ last year simply because the people were rude and showed no appreciation. I don’t care why they were rude. It is not my problem. In this respect I’m not a therapist or a psychiatrist. Rude is rude.