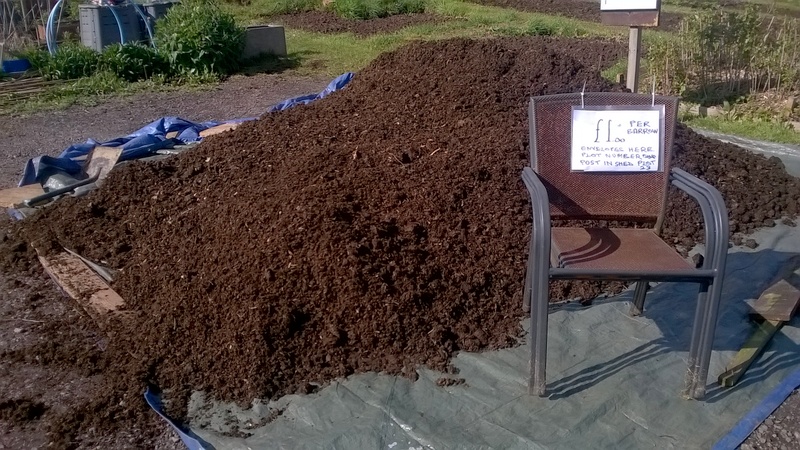 My special order of manure arrived today. It is a bit of a special item because it is organic matter, in this case farmyard manure, which had been placed in a large oxygen free container where it slowly breaks down, gives off methane gas which is harvested to produce electricity. The remainder is the byproduct. It will carry on breaking down releasing the nutrients to the soil.

The first tranche was free and that disappeared in about six hours. But I have to pay for the second load so it is necessary for people to pay. I put a notice on a chair adjacent with instructions and some envelopes attached so that people can put their money in, and post it to the shed at the plot of Françoise.

Today I had a good breakthrough experience. I realised that I was spending far too much time and energy reading the dreadful dystopian material connected with Covid, plus if that were not enough the forthcoming compulsory vaccination which will surely be with us (vaccinations are already compulsory in California and New York). Trends that start in America normally end up in Europe including of course the United Kingdom. The point is that there is so much money to be made out of vaccines that governments can be bought off even at great cost and it is still worthwhile. It is a question whether people will wake up in time.

But I digress. I have decided to continue my work on my 5G and Corona sites but be more remote from the actual details and the implications simply as a self protection method. I shall devote more time to reading, being outside, including my gardening when I can start again. That decision had a great instant healing effect on my mind. I also decided to do more psychic work. Interestingly a couple of hours after that someone whom I previously contacted called me up to help me to use Facebook to get new customers.

The car that I bought about a month ago has been sitting in my drive. I was finally able to get to a garage to be serviced prior to being on the road so with any luck tomorrow night it should be ready.  For this new (to me)  Volvo, my fourth, I paid £1250. I basically bought an MOT, due next January, with the car attached. I can’t be bothered paying thousands of pounds for a new car because I use it mainly for gardening and local work. I seem to have got off lightly this time because the garage could only find minor things wrong with it. I needed an oil flush and change because the oil was in such a bad state, windscreen wipers, a couple of new tyres, the power steering needed a fill-up, stuff in that range so I don’t mind that the car has done 161,000 miles. For a Volvo, that would be regarded as still running in. That by the way is a standing joke among Volvo owners.  It’s a V70 by the way and a turbo so it goes like a rocket. I hope the petrol consumption will not be too bad. I shall miss our old car but the fact is that the new MOT would have cost just as much as the car originally cost (strangely also £1250) and so that’s when I say goodbye.